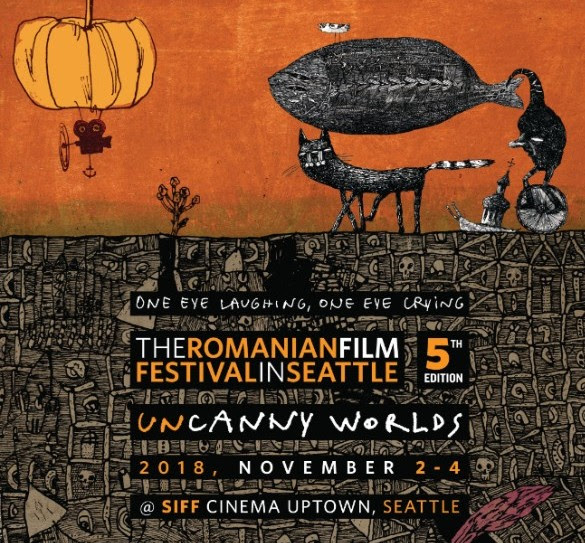 Miss Christina is the dramatization of a 1936 novella written by the famous Romanian author and historian of religions, Mircea Eliade. Considered the first Romanian title of the Gothic genre, the film tells a supernatural love story. Known in Romanian as a moroi or a strigoi, Miss Christina comes back from the grave to seduce her niece’s fiancé, Egor (Tudor Istodor), during his first visit to the countryside family mansion. The lady of the house (Maia Morgenstern) worships her dead sister’s memory, even to the detriment of her own daughter’s sanity and safety. When Egor realizes his fiancée’s life is endangered by his unexplainable lust for Miss Christina, he decides to fight the moroi. This screening will be followed by a Q&A with special guest Maia Morgenstern and the Opening Night Gala at SIFF Film Center.

SATURDAY | NOVEMBER 3
10am | Untamed Romania (2017) | Director: Tom Barton-Humphreys | Documentary | RomaniaUntamed Romania explores “one of the wildest and most beautiful parts of Europe”, from the mysterious Danube Delta to the unknown Carpathian forests. Wolves, bears, and lynx roam the vast forests where almost all the original flora and fauna still exist left untouched since time immemorial. There is no other location of comparable size with such pristine nature in Europe. This unique documentary is narrated by award-winning Romanian film and stage actor Victor Rebengiuc.

Unmarried Mara (Dorotheea Petre) has mysteriously fallen pregnant. This poses a problem for her fellow residents of the small fishing village on the Danube Delta, where religion mixes with superstition like earth with water. Expelled from her village, Mara finds employment at the nearby spa hotel Tekir where infertile women are treated with the sacred Danube mud. When her world collides with that of eccentric cosmopolitan Lili (Elina Lowenshon), magic combines with power, and tradition with modernity, to become the answer to Lili’s desire to have children. Mara’s ‘immaculate’ conception finally urges us to question and mourn our lost abilities to believe in miracles and healing myths.

Costi leads a peaceful life. At night he likes to read stories to his 6-year-old son to help him sleep. Their favorite is Robin Hood, and Costi sees himself as a similar hero – righter of wrongs and defender of the oppressed. One evening, his neighbor Negoescu pays him an unexpected visit and shares a secret. He suspects that his great-grandfather buried a treasure in his garden at the time of the Communist takeover in the 1940s. If Costi hires a metal detector to help locate the treasure, he will give him half of whatever they get. The two accomplices have one weekend to locate the loot and many obstacles in their path. With each layer of soil they unearth, memories of the past and entire chapters of Romanian history come to light. Winner of the 2015 Un Certain Regard: A Certain Talent prize at Cannes, and the 2015 International Federation of Film Critics (FIPRESCI) award.

The feature tells the story of Gabriel (Stefan Iancu), a teenager who wants to be a priest and has been recently admitted to a theological seminary. Trying to fit in first, he is fast to discover a world of fear and abuse. Lying, cheating and betraying are things the freshmen have to master in order to survive their seniors’ constant bullying, and the game of power and manipulation fed by a tough teacher (remarkably played by Vlad Ivanov). This caustic coming of age movie calls to mind boarding-school-set movies where oppression and brutality are widespread. After having taken 10 years to film, One Step Behind the Seraphim swept Romania’s Gopo Awards in 2018. This screening will be followed by a Q&A with special guest Daniel Sandu.

In 1995, Seattle-based director and storyteller Bogdan  was a teenager. He is now forty-one. After 23 years as an immigrant in the US, Bogdan comes back to Bulgaria for the first time. Who will he meet and where will his memories take him? Is his feeling truth, or is it just nostalgia? This is the U.S. Premiere of this film, and it will be followed by a Q&A with special guest Bogdan.

As miners in the Romanian town of Petrila go down the mine for the last time, artist and ex-miner Ion Barbu is working on his mission: preserving Petrila’s coal mine as cultural heritage. But in accordance with EU agreements on the closure of the mine, the authorities are committed to demolishing it completely. This would bring an abrupt end to a history with which the mining community still feels a deep affinity, but one that doesn’t appear to interest the politicians in the slightest. Barbu refuses to back down, doing all he can to keep the memories of the mine and the identity of his hometown alive. He covers the mine buildings in murals and organizes performances, street protests, an underground theatre festival and a clandestine film. This screening will be followed by a Q&A with special guests Andrei Dăscălescu and Paula Niculescu.

The film follows famed ghost and demon hunter Louis (Armand Assante) as he takes on a new case in modern day Romania. Hired by the mysterious heiress of the Zalesky Castle, the hardened American embarks on this adventure with an Israeli journalist (Lior Ashkenazi), two Korean reality television stars in search of sensational ghost stories, and a young, skeptical guide Sorana (Raluca Aprodu). As he starts hunting the evil lurking in plain daylight in the frightened community around the Transylvanian castle, Louis faces one of the biggest challenges of his career and life. This screening will be followed by a Q&A with special guest Dragoș Buliga.

A couple with longstanding marital issues lands at LAX after a getaway in Europe. For a few years now, Stefania has been working a job she detests and Dan hasn’t worked at all. Their palpable strain is only made worse when a Danish vagabond asks for a ride to the busiest freeway in Los Angeles. Stefania doesn’t want to have anything to do with the hippie looking wanderer, but much to his wife’s horror, her husband offers to bring this total stranger to their home. How will their encounter with this uncanny character affect their marriage? The director invites you on a 3 day journey, seen through Stefania’s eyes, to view and discover that desired change doesn’t always come in the package that we want or expect. This screening will be followed by a Q&A with special guest Elena Beuca.