Home / VS Daily / Catch These Hands: 5 Paintings From “Flesh and Blood” With Notable Hands

When I saw I saw Flesh and Blood during the press preview at Seattle Art Museum, an idea got stuck in my head: A tour of notable hands in the exhibit. So I wrote out a little exposition of ten works, and it ended up rather long. And I already hit people with a long essay on Flesh and Blood and the history of the Renaissance.

So why not divide it into five and five? Makes sense when the subject is hands, right?

The prim stoicism of Raphael’s portrait of Cardinal Alessandro Farnese is a model of aristocratic ethos—unmoved by the world outside. The impassive expression would be quite at ease among the more simply rendered visages of medieval arts. But despite that familiar stoicism, Raphael’s polished realism is very much a mark of the Renaissance.

But why is he holding a letter? Well, letters were a sign of literacy, for one, but more than that they were a symbol of rank. Not just anyone could expect to receive letters of import from afar. It may not look ostentatious to 21st century viewers, but it was a symbol of worldliness in Raphael’s time. Cool letter, fra. 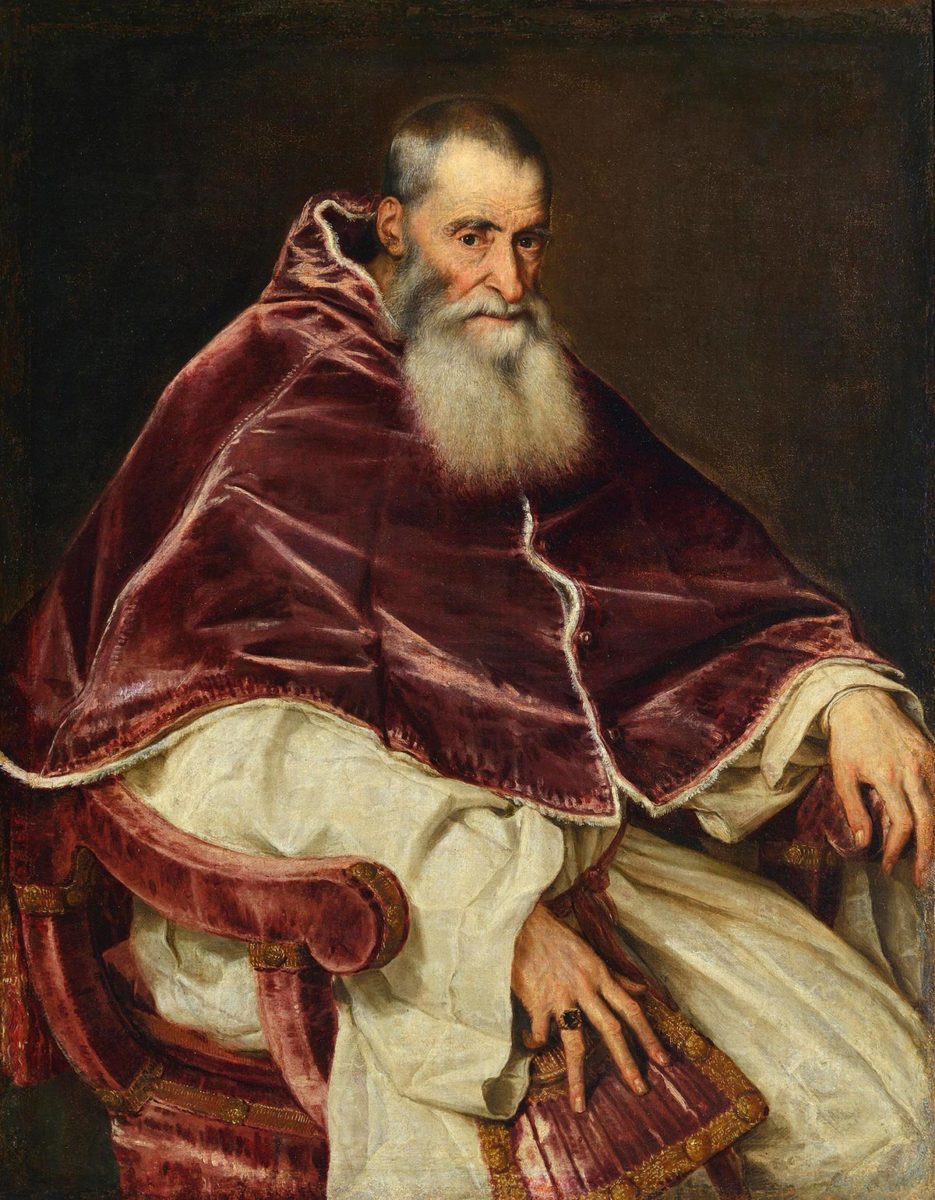 Titian’s portrait of the same man decades later (then Pope Paul III) is completely different. It’s not just a matter of age or hunched posture. The gaze is not impassive, but rather confrontational. And where is the hand now, with the pope’s ring on it? It rests on his purse, a symbol of the lucre of the church, over which he exerts control. And see how the face and hands draw the eye so utterly? The more consistent light values in Raphael’s portrait keep the whole of Farnese in focus, whereas Titian’s use of light and detail immediately draws one’s focus to these two points.

In centuries before Titian, the more allegorical or symbolic composition of images relied on what we call significance perspective to emphasize the most important figures. That is, they were rendered physically larger than others. Titian adapts this technique without sacrificing realism. The brushwork on the clothing and chair ensconcing Il Papa is loose…almost careless in comparison to his meticulous rendering of the hair, skin and accessories. (The use of chiaroscuro, or dark and light contrast, also plays a part, naturally.)

Titian and his subject want the viewers’ focus to be on the ring and the purse of power and the face of the man behind them. Still, that burgundy, velvety tree skirt he has on is a pretty kicky look, too. 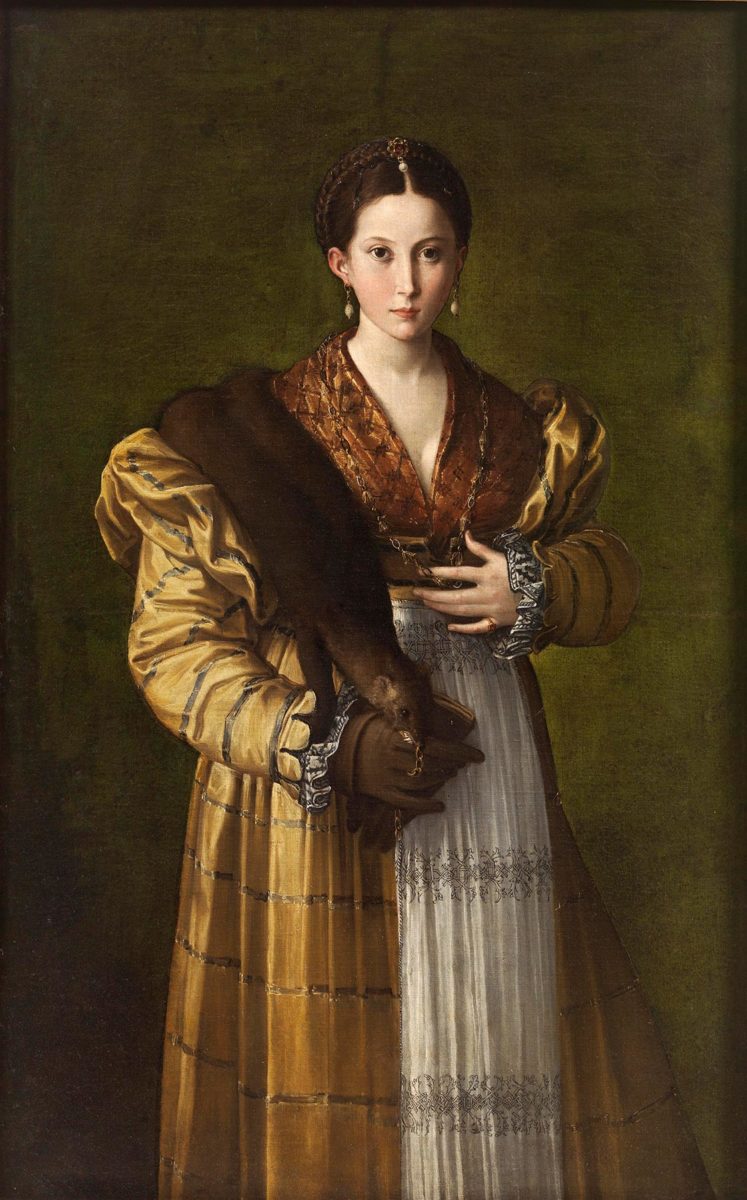 “Antea” And The Sable

The woman standing in Parmigianino’s “Antea” was almost certainly not named Antea. And whatever flesh-and-blood woman inspired the artist, she also didn’t exactly look this way. In the Mannerist style, Parmigianino has exaggerated the proportions of her body, with the head appearing shrunken atop the wide sloping shoulders, unreal even beneath her voluminous garments.

People have speculated that the mysterious woman may have been a lover of the artist, or an unknown noblewoman. She is called Antea now because the Baroque painter Giacomo Barri referred to the painting as such, after a famed Roman courtesan active in Rome during Parmigianino’s time. Indeed, some classes of courtesan in Rome were required to wear yellow in public to denote their role and status. But fashionable women were not denied the option of draping themselves in golden cloth, so the dress is not hard evidence of her profession.

So-called Presentation Portraits of young noblewomen were not uncommon on the occasion of marriage, but Antea doesn’t fit that mold of Christian ‘purity’ politics. The way that her bare hand rests upon the jewels hanging to her waist is blatantly sensuous. And even more bold is the sable draped over her shoulder, baring its teeth at her gloved hand. The symbol is clear: This woman is quite at ease with ferocity. It is as clear as her bold, forward gaze—those exaggerated eyes—and casts “Antea” more as a force of nature than a meek bride-to-be. 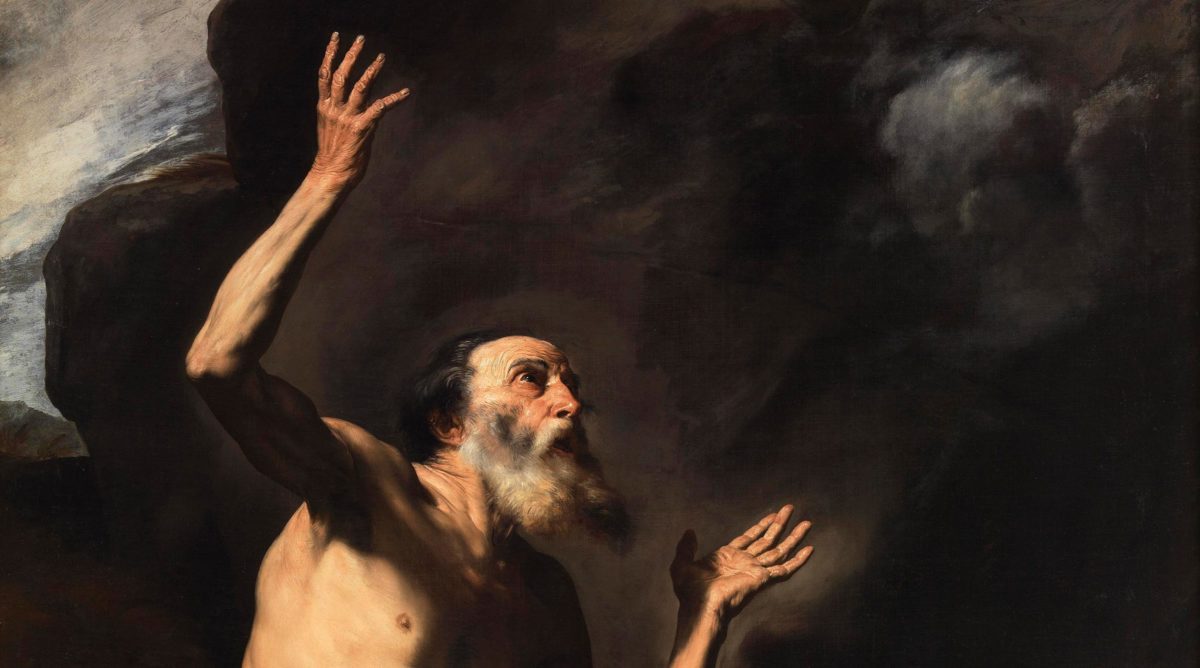 St Jerome Gets An Earful

Jusepe de Ribera painted Saint Jerome many times over his career, but “Saint Jerome and the Angel of Judgment” is his most dramatic—and arguably most mature—masterwork on the subject. (Side note: This painting was not part of the Farnese Collection. It entered the Capodimonte as part of the later Bourbon collection, about 25 years after the Farnese collection had been moved to Naples by Charles of Bourbon.)

In most of Jusepe de Ribera’s depictions of Saint Jerome, one sees a skull, sometimes held in the saint’s hands. This classic memento mori (emphasizing the impermanence of human life) takes on a special quality with Jerome, as he is credited with translating the Bible into Latin, the Vulgate. His work, therefore, outlives him in a way that few individuals can claim, and in Jusepe de Ribera’s painting, Jerome’s writing is referenced by the scroll in the lower right.

But this painting also draws on a commonly depicted incident from St Jerome’s personal mythos. As an ascetic in the desert, he was said to have been startled by a vision of the Angel of Judgment blowing a trumpet into his ear. Jusepe renders Jerome’s face with genuine awe, but he gives a special, tender nimbleness to the hands and fingers uplifted in a gesture of surrender. It is one of the finer examples in Flesh and Blood of the hands and face receiving total consideration to convey an ineffable psychological (or spiritual) state to the viewer.

The artist did not confine himself to depicting classically beautiful bodies with taut flesh and visible musculature; he dignified the old, such as Jerome, and the rotund, such as Silenus, in another painting by him in Flesh and Blood. That one is hung on the next gallery, across from the final selection in this list. 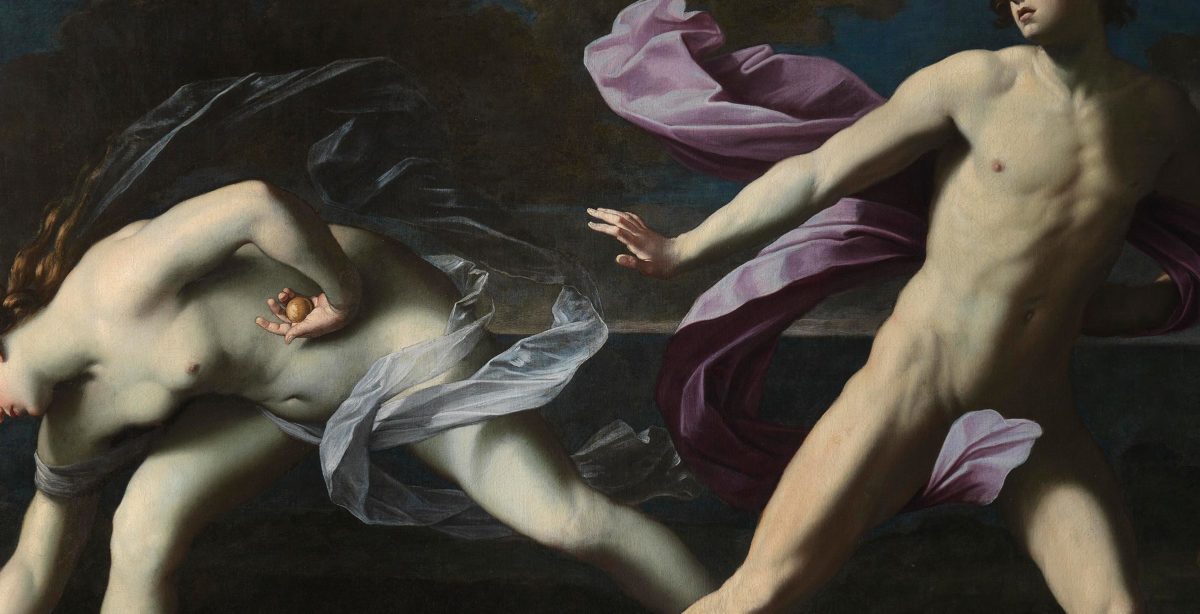 Guido Reni is a personal favorite from the era, just because he’s such a weirdo. His cool, precise, impossibly balanced paintings feel like intellectual antecedents of later weirdos, like Blake and the Symbolists of the 19th century. His portrait of Atalanta and Hippomene is Reni at his finest. Though the two are in the midst of a punishing race, neither seems the least bit winded…or even very invested in it.

Individually, the figures show wonderfully dynamic counterpoise, and in combination (with their legs crossing) this effect is only heightened. Atalanta stoops to cradle one apple while reaching for another. Hippomene springs ahead, one hand drifting forward while the other hand pushes back. In the myth, the whole point of the race between the two was to win Atalanta’s hand, but Reni’s vision is drenched with ambivalence, with Hippomene’s hand almost asserting a rejection.

Victory is in sight for the youth, but he is not joyful. It is as if they both know that they are endlessly repeating this mythic race, and it just has to be this way. The thrill of the pursuit is gone, and they are just going through the motions—an elegantly somber dance captured eternally by Reni (who, by the way, never married).

Stay tuned for the next round, and see Flesh and Blood before it closes on Sunday, January 26. 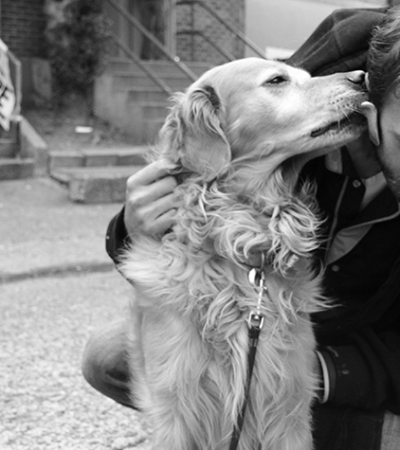 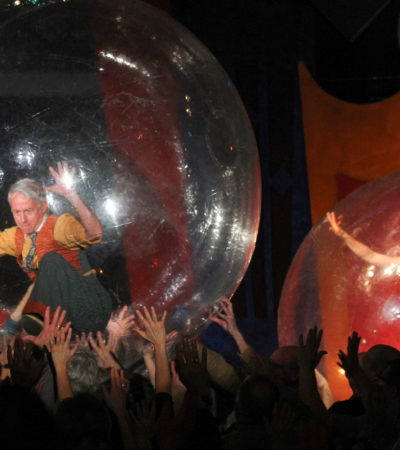