With this fantastic weather come numerous events and distractions. Still, don’t skip your visit to Pioneer Square and Downtown. Here’s a quick look at what’s in some of the galleries this month, including two personal picks that we consider “can’t-miss” shows.

We typically associate May with continuing rebirth, but Gallery 4Culture presents a show that seems to dwell in a twilight afterlife. Memphis-based artist Kate Roberts presents Walking on Ghosts, a series of images made with clay dust. Some are delicately formed on sheer fabric. Others use porcelain dust on black velvet within blackened frames, the total effect of which is something like seeing the image of a ghost captured from a destructive fire.

That is, of course, just one way of seeing the image. Such visual meditations on fragility and happenstance will evoke many things. See more on the 4Culture website. 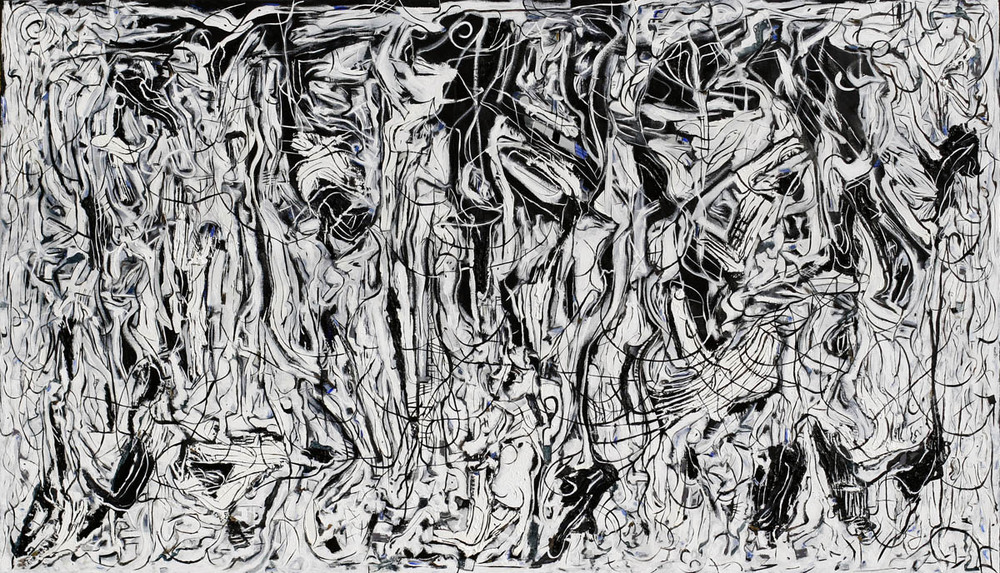 At Gallery 110, catch M R McDonald‘s sizeable abstract paintings. This collection, created mostly between 2004 and 2010, is akin to Lee Krasner, Jackson Pollock and other Abstract Expressionists, but appear more thought-through, with less painterly, finer lines. That said, the comparisons aren’t that concrete. For example, in a piece like “Colony,” I see figures in the ordered chaos that remind me of William Blake. (I’m rather taken with it, personally, in case you couldn’t already tell.)

There’s no need to reinvent the wheel if you do what you do really well. That’s the case here, with two shows by local artists who really nail their respective mediums.

For fans of Arcimboldo and natural imagery in general, Meggan Joy Trobaugh‘s new series of digital photo collages are a must see. This medium and subject matter can be so cheesy, and in less thoughtful hands it would be. But Trobaugh’s dark, dulcet collages of foliage and flowers are so precisely arranged that they paradoxically verge on losing their vegetal qualities entirely, and the effect is bewitching. (It’s a different effect than Arcimboldo, who painted in a more naturalistic fashion.) Hundreds of elements coalesce into expressive hands and stoic humanoids—composites from this world, but decidedly outside it. Preview them in the online ebook of the series, Earthly Delights. 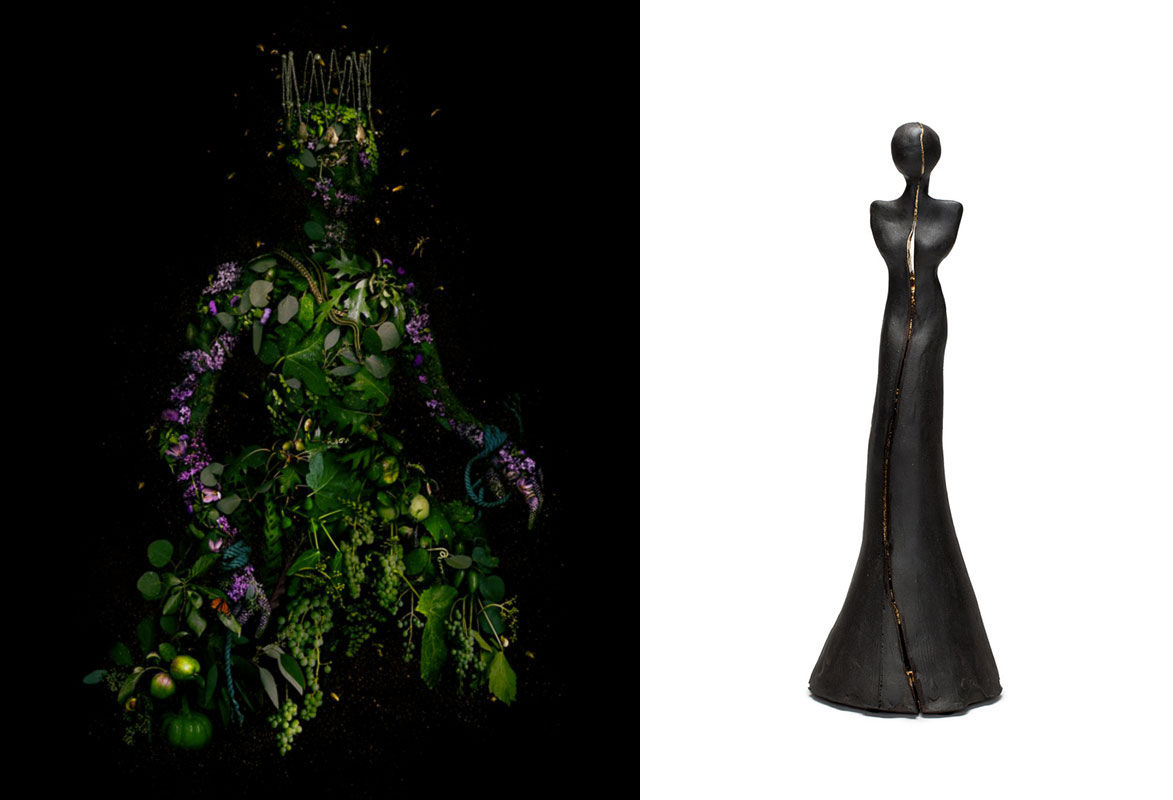 Sculptor Mary T Enslow has been creating a series of distinctive figurative works for years, but with each iteration, the nature of the bodies changes. All are elongated, sometimes missing heads or just features. Some are winged, others tattooed with runes, or pierced with pins. Some are glazed to a shine while others seem ready to return to the dust from which their clay was formed. The fifth and latest iteration in this series, Ascension, includes some of her most elegant and enigmatic forms to date. The common theme among many of the works here are splits, that may run through the torso or almost the entire length of the body.

A sense of natural wholeness in spite of separation permeates both shows, making it a fantastic pairing and one distinctly appropriate for the season. Read more on the gallery website.

Along Main and Jackson 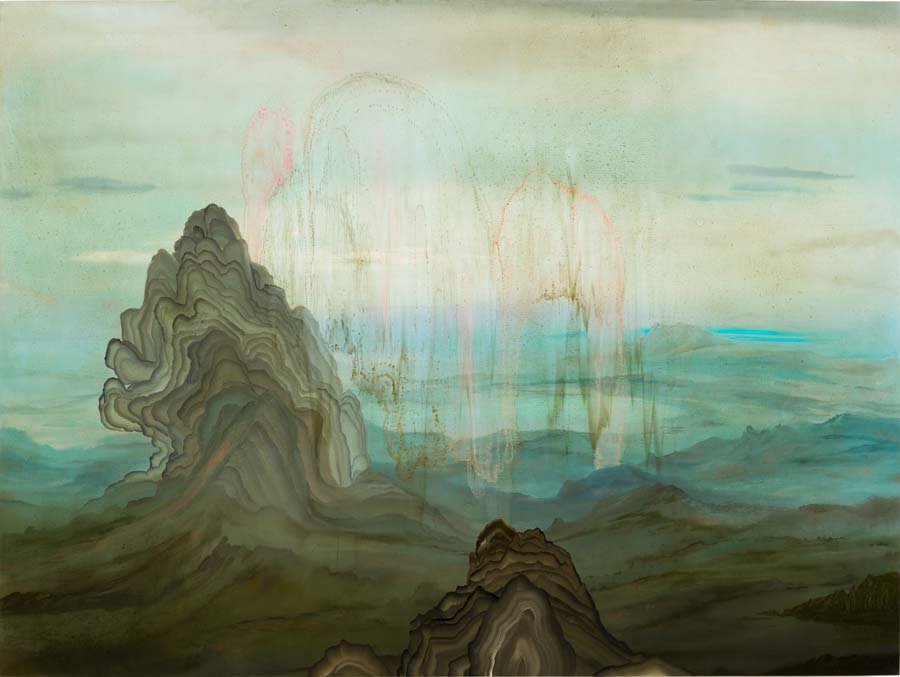 At Greg Kucera Gallery, see new and recent works by painter Darren Waterston. The gap between abstract and landscape painting is crossed…and crossed again in Waterston’s work. Surprising color choices and the inclusion of animal, vegetable and mineral throughout keep one wondering at what one is seeing, all in a satisfying, sometimes eerie way. In the back galleries, don’t miss a great selection of works on consignment by Pacific Northwest notables, including Mark Tobey, Morris Graves and Jacob Lawrence, as well as established east coast names, such as Eric Fischl and Robert Motherwell.

Next door, at Foster/White Gallery, check out the visually engaging mixed media works by Andre Patterson. Colorful materials (wood, rope, painted canvas) and printed images are staged and piled in a studio, and the photos of these arrangements are then further embellished. The veracity of images (or lack thereof) is a common theme in contemporary art, and Patterson explores it in a graphic, playful way.

At Gallery IMA, check out cast aluminum and fiberglass sculptures by artist Larry Pentz. The works evoke geologic strata, but in a metallic monochrome that makes clear their industrial origins. (Pentz makes the sculptures in a foundry that he owns.) Pentz has been at this a long time, but he’s still playing with the shapes and configurations possible in his work. 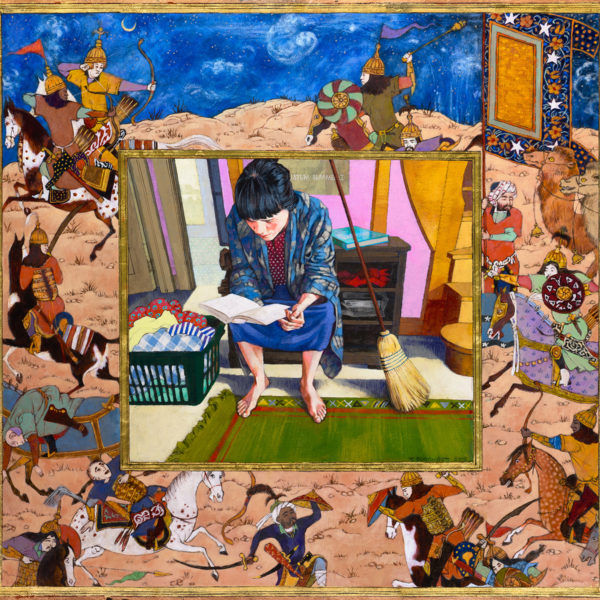 Terry Furchgott, “The Secret Life of the Home.” Image courtesy of Harris/Harvey Gallery and the artist.

Harris/Harvey Gallery presents the latest figurative paintings by Terry Furchgott. The title of this body of work, Intimate Interiors: Women at Home, succinctly expresses its subject, but the handling is more complicated. Furchgott’s subjects can be staged or candid. Some are costumed, and some are nude. Some are shown in domestic scenes framed by colorful illustrations of stars, landscapes, floral flourishes. And Furchgott’s hyper-saturated palette and varied brushwork keep the viewer ever aware that these are not natural images…yet how real these women seem, and how lived-in their worlds.

Abmeyer + Wood represents a number of artists that make figurative sculptures that blur the lines between human and non-human animals. The works of Alessandro Gallo are among some of the more literal, less fantastical versions of this. Gallo’s show, Most of the Time, features human figures in rather banal poses and settings (soaking in a tub, or seated in what appears to be couple’s therapy) and their only uncanny element is the heads, which are non-human. Clever choices keep the humor high. E.g. in the piece “Brooks and Oliver,” the human figures are perched in hipster attire, with the heads of passerine birds. The technique is strong, and so are the possibilities for empathy (with human and non-human alike).

This is James Harris Gallery‘s seventh solo exhibition of works by the late artist Akio Takamori. Known primarily as a sculptor, Takamori always played with the human form, but attentuated its sharpest edges, creating figures that were at turns gentle and pathetic. His mastery of glazes and illustration on these forms sometimes complicated his subjects by hinting at narratives that were incisive, even sinister. This collection of primarily two-dimensional works at James Harris Gallery shows both his skill as an illustrator and printer, and dives more explicitly into the erotic and violent content that were left a subtext in his better-known works. 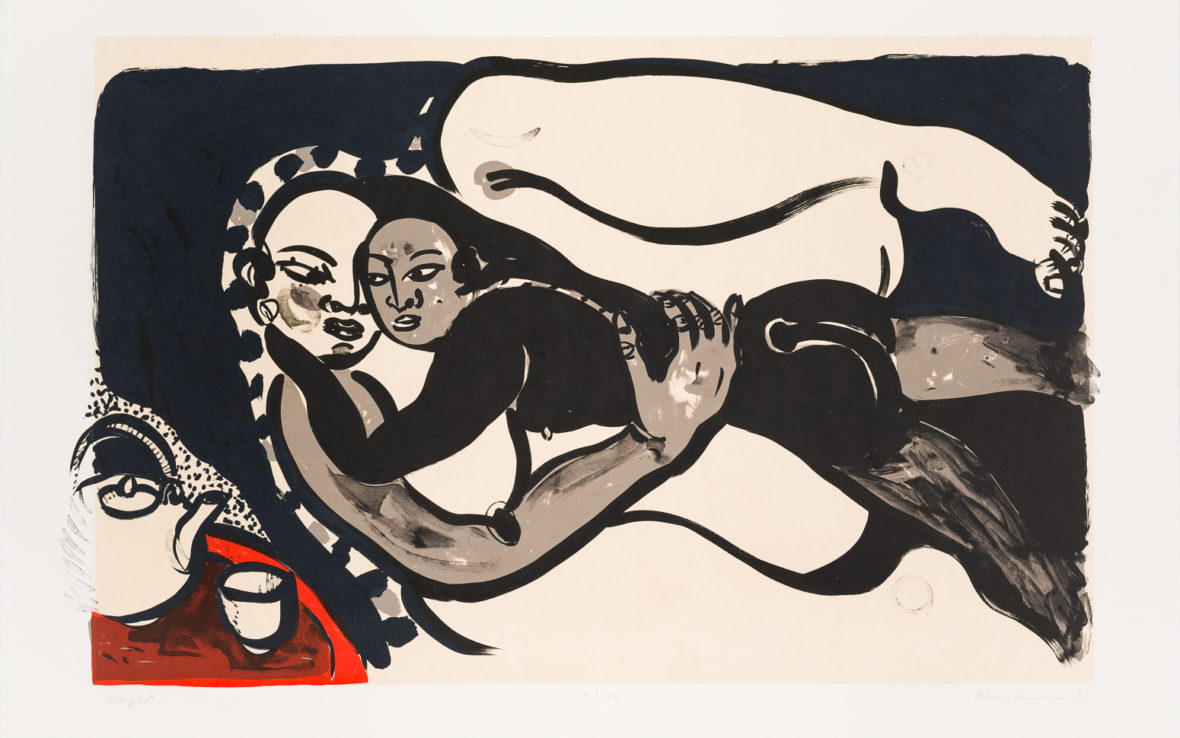 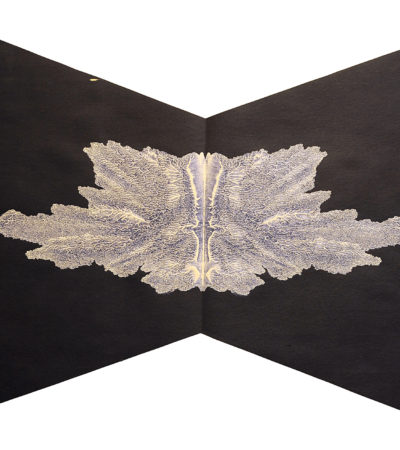 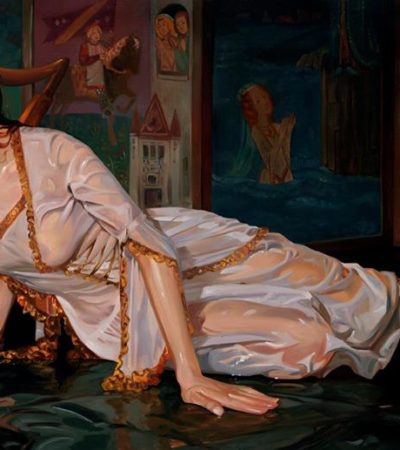 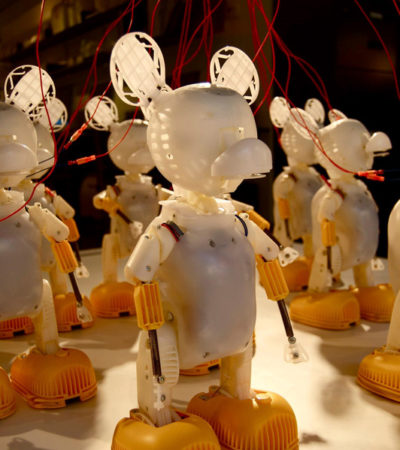 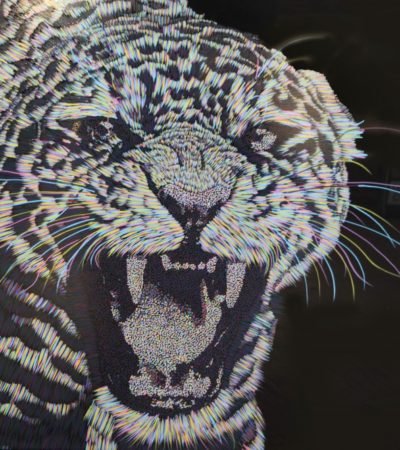