Despite being a longstanding Seattle institution, The Frye Art Museum only began acquiring and commissioning new works in earnest during the seven-year tenure of its recently departed director, Jo-Anne Birnie Danzker. In her last show for the museum, To: Seattle | Subject: Personal, some of those artworks are brought back for a second look. The Wind Jangle by Leo Saul Berk specifically designed to hang from the oculus in the Frye’s front atrium is perhaps the least altered by the new context, in part because you get to it before you get to Birnie Danzker’s texts.

Much as a painting can—but not necessarily should—be evaluated on its internal logic without constant reference to the artist, a museum show is generally evaluated on the interaction and quality of the works displayed, not the mood of the curator. The flatly stated “personal” nature of this show, however, makes the curator omnipresent. The Frye’s new director and CEO, Joseph Rosa, is already at work in the offices, but the persistent mark of Birnie Danzker in the galleries makes for an awkward interregnum and a slightly awkward viewing experience for long-time visitors.

But then, curators at institutions today are all in an awkward position. In the early 20th century, museums were envisioned as secular cathedrals, the sacred ground of humanism. In reality, as shrines for the spoils of colonialism and displays of massive wealth, their foundations were far from humanistic. To rectify this, museums are being called to be more interactive, to incubate new work and engage communities directly, but the question of authority remains. Do museums (and those leading them) have authority?

As places of scholarship, they still do, and as a scholar, Birnie Danzker has done incredible work, especially in connection with monographic shows of historical European artists at the Frye. As a curator, she is an adept translator for audiences, one whose authoritative voice inspires confidence in her reading of history and the importance of works that other institutions have neglected.

This show’s titular opening wall text, written “To: Seattle | Subject: Personal” comes from a completely different place. Perhaps some visitors will find its casual, idiosyncratic tone disarming. I find it an imposition. It’s not a thesis, nor a coherent context, nor something purely evocative. It’s an alloy of all three, which in short is sentiment, and it gets in the way constantly.

Sentimentality is the last thing we need, especially regarding the international and local turmoil to which Birnie Danzker speaks in the letter, beginning with her personal experience of the 9/11 attacks. However, in lieu of scholarship and an extended historical context—and at a time when the very tenability of humanist ideals is being challenged—such sentimentality is precisely what is expected by audiences. Birnie Danzker is just giving the people what they want. As for the question of authority, she uses the institution to point the the real authorities as she sees them: the artists.

Artists are “models for being” who “honor the living, the dead and the dying,” she suggests. “They embody the politics of resistance, change and adaptation,” “document our land and memories,” “proffer ecstatic states under conditions of extreme restraint,” etc.

When a curator writes a paean on the essential power of artists, the claim feels axiomatic, and if one has cultivated a healthy skepticism in the new millennium, what is axiomatic is immediately suspect. The primacy of artists is simply not a case one needs to be making at the outset of a show, but what else can one say of a collection of unrelated works of recent provenance?

Moving into the exhibition, if we forget this introductory text exists, can we avoid the sentimentality elsewhere?

Throughout the show, the words are either not doing enough, or getting in the way. High up on the wall, languid and disjointed musings on art, political events and fragments of that opening text just feel a bit precious. They allude to the themes of the exhibitions in which the pieces were originally found, but illuminate nothing for those who did not see them. Their similarity in form to the marvelous, short, ekphrastic poems by Maged Zaher actually detracts from the latter.

At least Zaher’s poems still feel connected to the paintings that inspired them (all of which come from the founding collection). Those paintings notably offer the most abundant color in To: Seattle. It is probably just coincidence that black and gray dominate the palette on the majority of recent acquisitions. However, in a show that already feels funereal, that limited palette doesn’t help.

It’s still a mostly attractive show, which is unsurprising because Birnie Danzker has consistently created some of the most gorgeous, thoughtfully hung shows in town. Many of those were desaturated, too. The recent Vilhelm Hammershoi exhibit was awash in pearlescent grays and one of the most beautiful things I have seen anywhere all year. Also from 2016, the ghostly, earthy tones of Cris Bruch’s Others Who Were Here bespoke a spartan life on the desolate plains of the Midwest. (And yet, Bruch’s wall sculpture “Eidolon” provides a rare glow of color in To: Seattle.)

In this show, one room in particular is all gray and black. Pan Gongkai’s monumental ink painting “Withered Lotus Cast in Iron” dominates it, but doesn’t disturb the melancholic stillness of a small sculpture by Mark Calderon and photo by Rafael Soldi. One follows Pan’s amazing brushwork to the far wall, to these two meditations on loss, flanking a door to the atrium sealed by a ghostly scrim.

Calderon’s child-sized hoodie made of black spine repair tape admits to an absence, palpably tragic. Soldi’s portrait of a young man turning away from the camera nearly absorbs the subject into a field of middle-gray…an absence in the making. The dissolution of the body creates a harmony between the sculpture and photo, and even the door itself through which one might dimly see other guests. This is a successful poetic touch in the exhibition design.

In another room, one even detects a subtle dialog between pieces. A large-format video by DK Pan is projected across from portraiture by Inye Wokoma. Pan collaborated with NOAA to record coastal views along the West Coast. The short films from Wokoma’s show also heavily referenced water. Pan’s littoral documentation is a meditation on environments that are in flux and will be changed dramatically by future climatic events (and tsunamis). Wokoma aims to document a lineage disrupted by colonization and diaspora (both of which crossed oceans). Beyond looking good by each other, there is a subtle thematic connection for those familiar with both artists.

Unfortunately, one faces a false cognate in the proximity of works by Degenerate Art Ensemble and Implied Violence. Specially designed musical instruments from DAE flank a door, through which one sees the “Black Bow Dress” designed by Anna Rose Telcs for Implied Violence’s Dorothy K. The two art troupes are distinct in style and philosophy, but the appearance of artifacts from their works are just close enough that a connection seems implied, and that is a problem when they are too often confused for each other already. 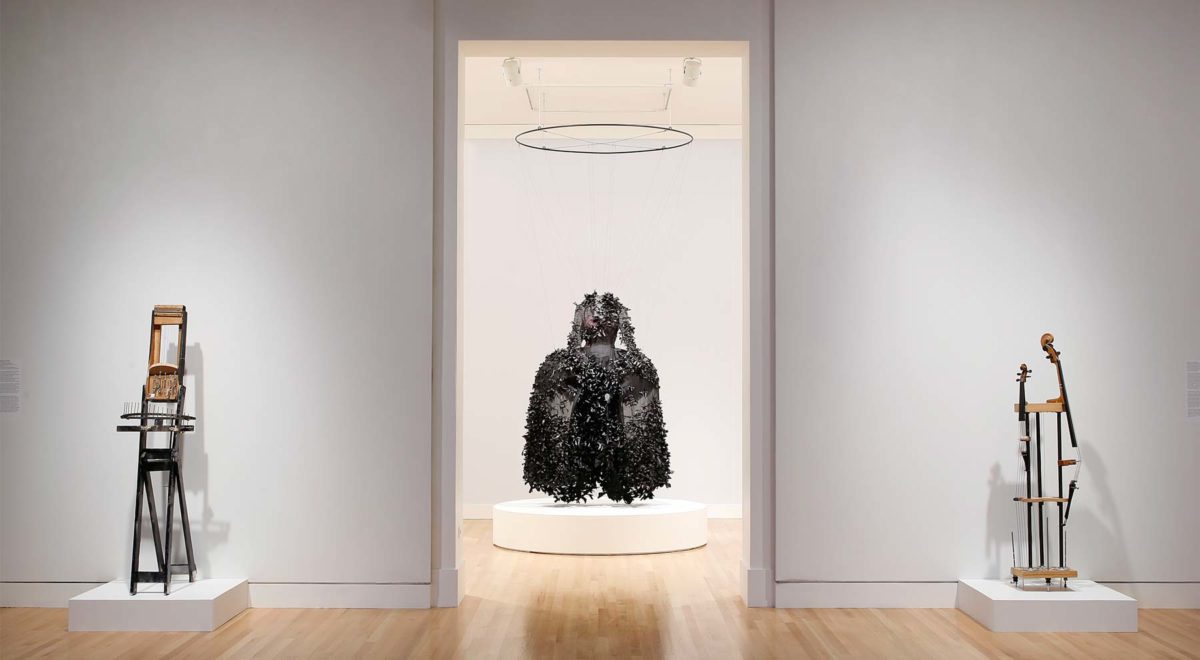 For most visitors, authorship is less important than function and effect. Again, this is something that is hard to glean, as the didactics on the walls (usually another strength of Birnie Danzker) are inadequate.

Perhaps Liu Ding alone gets the most effective wall text, and of all the works in the show, his most benefits from a new presentation. His 2012 Liu Ding’s Store: Take Home and Make Real the Priceless in Your Heart was originally displayed as an installation. Around two dozen paintings of the iconic snake and frame of Franz Stuck‘s “Die Suende” were created by reproduction painters in China, which Liu then signed himself. In 2012, they were piled and stacked so that one could not really see the ways they varied. Hung on the wall, one now sees how each is distinct, none very faithful to the original. It’s an entirely different effect.

Liu’s Store cleverly comments on the commodification of art, mass production, originality and authenticity. It’s also a study in how a work of art is often greater than the sum of its parts. Conversely, the whole of To: Seattle feels distinctly less than the sum of its parts. Furthermore, if one does not come with skepticism to the show’s guiding sentiment (faith in artists as visionaries), Liu’s meta-criticism of the money changers in the temple ought to raise a few flags.

Art with a capital A is not the art market, nor the art world, nor any institution…nor exclusive to working artists, for that matter. I understand why in her texts, Birnie Danzker attempted to make the essential power of Art concrete by tying it to the actions of artists, but the show makes a flimsy case. At base, I think she was so close to these works and, in her own transitional state, her usual clarity was lost, and so was the translation to the audience.

One can at least say that the Frye’s continuing mission to nurture artists and community engagement is at least displayed with humility. One can also feel confident that Birnie Danzker will serve and illuminate for many years as a scholar and curator. To: Seattle isn’t a swan song; it’s too muted for that. It’s more like muffled echos of a more vigorous shout. Jo-Anne Birnie Danzker’s shout at the Frye will not be forgotten, but like so many earnest gestures, To: Seattle will. 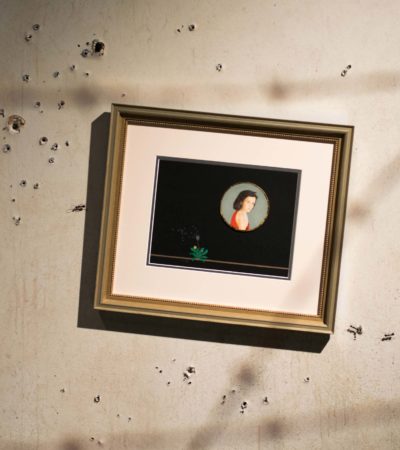 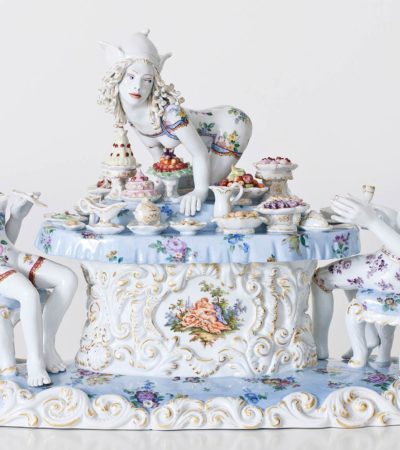 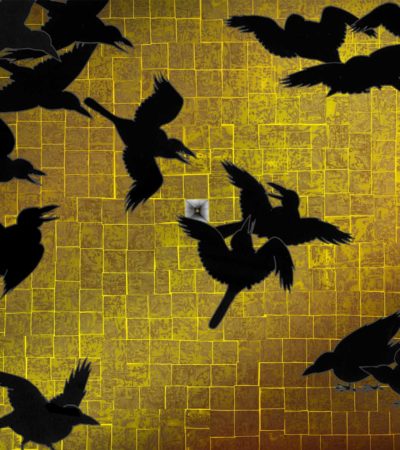