“Paradise is in full swing,” recites Sarah dutifully from the list of 20 approved phrases in the Bachelor lexicon. She is definitely here for the right reasons. It’s “week 2” of season three of Bachelor in Paradise, which means three more hours of television content to mull over.

As predicted, last week’s teasers were a lie and the drama ended with Chad in week 1. We see him pour a large amount of Johnny Walker Red into a plastic cup on the bumpy van ride out of Paradise while vaguely plotting revenge on his enemies, but that’s as far as it goes.

One man down means one less rose to give out, so imagine the girl’s ire when yet another lady saunters on to the beach. It’s Leah from Ben H season, who famously tried to throw one of the Lauren’s under the bus in a desperate coup at the final hour when she realized she was probably going home. She had no personality up to that point, so her sudden villainy made for a healthful shock. 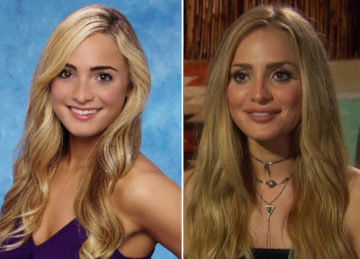 The other girl’s from Ben’s cast are so fake happy to see her! “She looks… different,” they all say. “We can explain!” tabloids the world-over cried. “She had a lot of plastic surgery!”

Leah’s got a date card and wants to give it to Chad, in a gesture that says, “I like when men are mean to me.” She uses the date card on Nick instead. In the date’s closing moments, Nick and Leah face each other on the beach in front of lapping waves and a sunset for their “I had a really good time today” conversation. The date seems lame but circumstances demand they make out anyway.

Leah doesn’t know that Nick already has his eye on Amanda, and not seconds later, Nick uses his date card for an evening out with the mother of two. They make out and everything seems perfect.

The men will be handing out their roses soon, which inspires some last minute politicking from the women. Lace and Grant have already established themselves as a couple the old fashioned way. (They boned). Carly shares a brief kiss with Evan, which they describe in separate interviews as “terrible” and “magical,” respectively. Sarah makes an attempt at Vinny‘s rose, but his thing with Izzy still burns strong from last week.

Daniel proves himself a consummate orator when Leah, scrambling after her failure with Nick, makes a play for Daniel’s rose. She tells Daniel that she has a lot of layers. “Like an onion,” he replies, helpfully, and then, upon further reflection, “So you’re like an orange. With one layer.” Daniel is such a brave little soldier—I swear, if I had an extra Purple Heart lying around, I would gift it to him.

The results of BinP’s first rose ceremony of the season are as follows:

Jubilee and Leah are both eliminated, and it’s sad. They barely had time to fly. 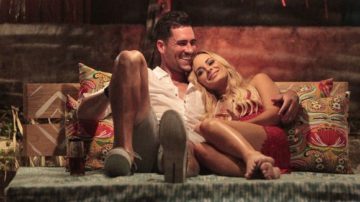 Josh and Amanda, sitting in a tree

Holy Lord, here comes Josh, the winner of Andi Dorfman’s season, the all-American dream hunk who defeated Nick for Andi’s heart, the subject of Andi’s very recent book, It’s Not Okay, in which she tells all about the breaking of their engagement and alleges emotional abuse by Josh… he’s so good looking and nobody can believe he’s here in Paradise!

With supernatural cunning, Josh hones in on Nick’s love interest and immediately swoops Amanda away for a date that is somehow leagues better than the experience she had just moments before with Nick. Amanda and Josh make out continuously for the duration of this week’s programming, and this is where the show starts to get my goat a little. Never do we hear Amanda’s thoughts on the man switch, and surely she must have had some. She lost her voice somewhere in Josh’s mouth!

Carly and Evan And The Terrible, Horrible, No Good, Very Bad Date

“I really do have a lot of feelings in my heart.” -Evan

Carly never should have kissed the dweeby, ineffectual Evan in the first place, but bless her heart, she just wanted a rose to stay and fight another week. I knew the moment I saw his bio for Jojo’s season that Evan was a layup cast member placed among the beautiful people for us to pity and make fun of, and yet, he never seems to clue in to his role.

The producers are aware that Carly hates Evan at this point, and so when Evan asks her out with his date card, they do the only decent thing and make them kiss in front of a large crowd with hot peppers in their mouth in pursuit of the World Record for “hottest kiss.”

“Why do I always get the most awful dates?” Carly opines. She hates every second of their revolting, 141 second long kiss and literally throws up afterward. Evan thinks the date went really well.

“I’m going to have to break up with Evan,” Carly says, and after that’s done, “Evan is my ex boyfriend.” It’s like they’re twelve.

I’m an eagle, and this eagle knows what he wants. This eagle is going in for the kill tonight. – Daniel

“I hope Sarah doesn’t go out on a date with Christian,” Daniel says. “Because I want to go on a date with her.” Daniel likes all kinds of straight things and definitely wants to do them with the chicks in Paradise.

But alas, Christian (unremarkable from Jojo’s season) is a mythical dolphin come to swoop Sarah up on a romantic zip-line date. Oh my gosh, this date looks like a lot of fun, and Daniel thinks so too! Daniel wishes he had been able to go on the fun zip-line date with Sarah. When they return, we learn that Sarah may indeed be conflicted between the handsome, normal Christian and the bird-like, awkward Daniel.

“I’d kiss you,” Daniel says to Sarah, “but I don’t want to give you the Zika virus.” It is weirdly touching, although a stark contrast from his earlier eagle comments.

Enter Brandon, aka, The Parent Trap

Nobody knows who Brandon is when he walks onto the beach, but I remember him from Desiree‘s season of the Bachelorette as the guy who told her he was falling in love on like, the second or third episode and then cried when he got sent home for being creepy. To Chris Harrison, Brandon just talks about a funny thing he wore on a group date as his defining moment, so fine, we’ll go with that. 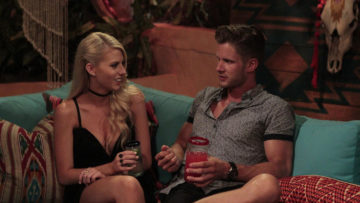 Haley (I think) and Brandon

Brandon asks out the remaining available twin, Haley, as he profusely insists that he is aware that they are different and can totally tell them apart from the spirit that radiates forth from their tiny little bodies.

Let me just say, I like these twins a lot. They seem like good friends and kind people who are here to have fun and aren’t taking the experience too seriously.

So when the twins decided to pull a fun prank by pulling the ol’ switcheroo on Brandon halfway through their dinner date, what choice do we have but to go along. Of course Brandon has no clue and the whole thing is more awkward than cinematic.

Evan’s self-talk includes the statements, “I deserve love,” and “You’re fricken… Evan Bass. you got this.” Here is Evan’s horrible, misguided and difficult-to-watch plan, which they’ve been teasing all throughout this week’s episodes:

Evan is going to make a play for Amanda by giving her a homemade date card, and in the clip, he literally interrupts Josh and Amanda making out on a duvet in order to do so.

Surely, I thought, he doesn’t really interrupt them making out. That would be pathetic and sad, even for Evan. It’s an editing trick.

Nope. It wasn’t an editing trick. He really did do that. And the episode ends before we can see the consequences of his folly.

So far, there’s not a whole lot of suspense built up leading into week 3. Will Sarah choose Daniel or Christian? (My head says Christian, but my heart and soul yearn for more Daniel.) Now that Josh has stolen Amanda, will Nick be left with no one? (No. someone else will arrive.) Will Haley forgive Brandon’s ignorance and give him her rose? (Probably.) Who will Carly save? (Daniel, please!) When is Lace going to start drinking too much like the show’s teasers promise? (Next week.) And what will come of Evan? (He will go home.)

Tune in next week when all will be revealed. 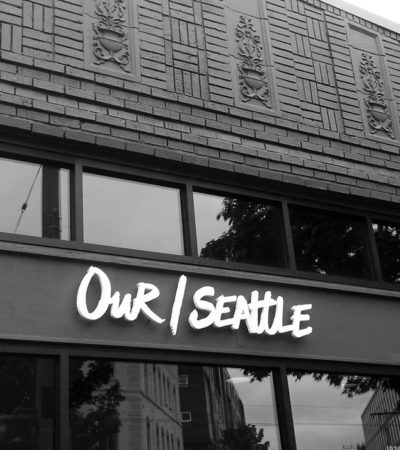 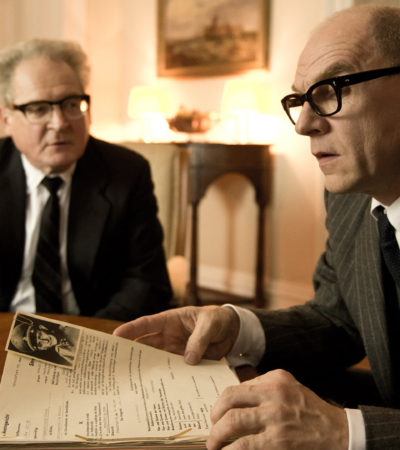 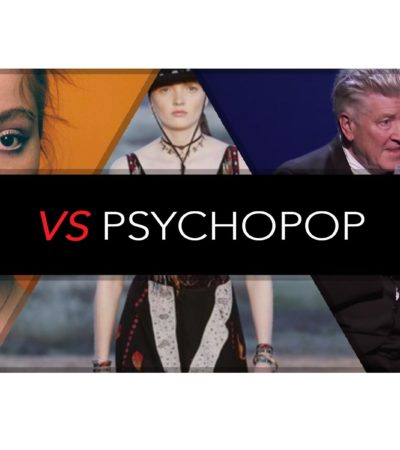