The Seattle Art Fair grew by 22 galleries in its second year, and many exhibitors seemed to be savvier about Seattle audiences and the overall aim of the fair than they were in the first year. There were so many great booths (elegant and understated, fun and maximalist), but I have picked five that excelled in their design or curation or both. The criteria I have identified may not be the most obvious, but they are important things to have represented in an international art fair. 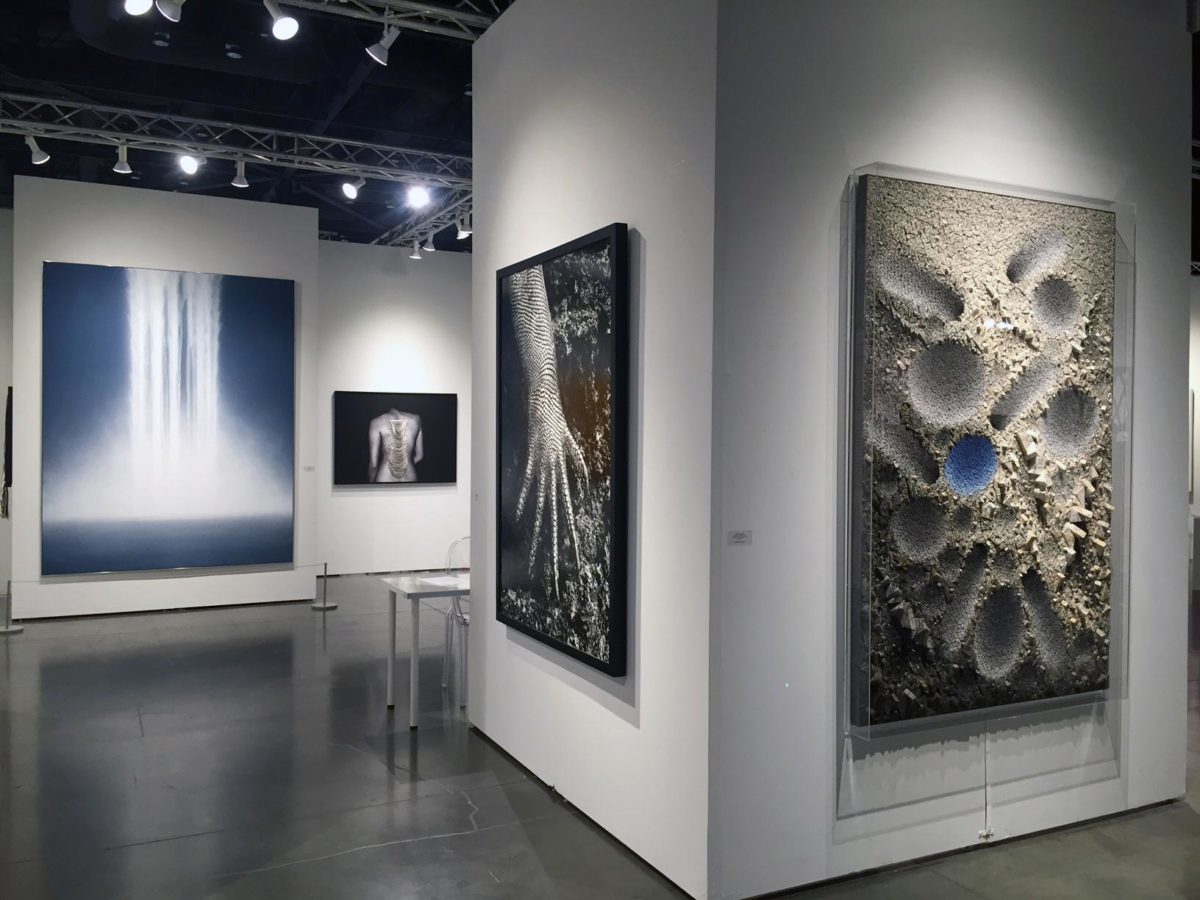 People asked me all the time what I would take home if I could have anything in the fair. My reply was, “I’m not sure, but it would probably come from the Sundaram Tagore booth.”

The gallery managed to display a wide variety of sophisticated work and still keep it cohesive: the meticulously cut photographs of Kamolpan Chotvichai; the entrancing waterfall paintings of Hiroshi Senju; a bold sculptural wall diptych by Golnaz Fathi (NFS); a hilarious installation of hanging metal bikinis by Tayeba Begum Lipi; paintings on the edge of total entropy by Gerhard Richter; and a multi-media wall sculpture by Anselm Kiefer. That’s just to name a few. One of the goals of Seattle Art Fair is to capitalize on Seattle’s location and bridge cultures on the Pacific Rim. The special exhibition of work contained in the 2015 Seattle Art Fair was curated with that in mind, but in lieu of a special exhibition, the Sundaram Tagore booth really brought a lot together, from late-capitalist dissolution in Europe to mystical exuberance in Iran to zen tranquility in Japan.

See more from the Sundaram Tagore booth on Artsy. 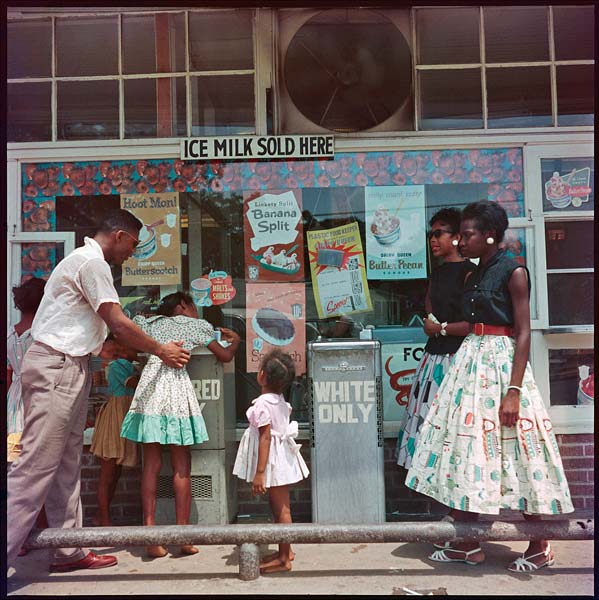 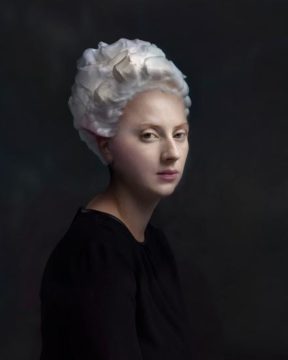 18,000 people rolled through the Art Fair in a few days, but it never felt oppressively crowded thanks to the ways that the organizers used the space. All the same, I think a lot of us don’t like crowds, and dodging among people for a full day can be tiring. Among the bevy of precious, abstracted objects that made up the bulk of the fair, how restorative it was to see so much gorgeous and strong portraiture at Jenkins Johnson Gallery: prints from Gordon Parks’ “Invisible Man Series” and other candid shots from the civil rights era; richly textured, wall-sized portraits of Muslim women by Lalla Essaydi; theatrical and super-saturated tableaux by Aida Muluneh; the the placid, perfectly lit portraits by Hendrik Kerstens of his daughter, Paula, wearing common materials in ways that mimic old world attire. For example, a wig made of shaving cream.

Few booths devoted so much to the photographic medium, nor showed such variety in its human subjects. Even the work at Jenkins Johnson that was not explicitly representational still reveled in movement and the human form: e.g. Nnenna Okore‘s sculptural dress, Scott Fraser‘s painting of a flattened manikin toting a paper airplane made of sheet music. In short, it was an oasis of smart, humane, historically important work in a sea of “cleverness.”

See more from the Jenkins Johnson booth on Artsy.

I don’t typically want to see a lot of secondary market artwork at an art fair, but Jerald Melberg Gallery curated their booth so superbly, I didn’t want to leave. In Seattle, we see a lot of works from the Northwest Mystics and Jacob Lawrence, so it was great to see a strong collection of east coast masters that had sympatico with these local artistic staples. In the case of the mystics, a slew of works from Robert Motherwell—sometimes watery, sometimes fiery—would never be confused with a Mark Tobey, but being allusive to calligraphy in form, they make a nice match. Meanwhile, the colorful collages of Romare Bearden are a rural, stylistic counterpart to Jacob Lawrence’s paintings and lithography. It was great to see works that were distinct, yet could also feel familiar to local audiences raised on artwork specific to the region. 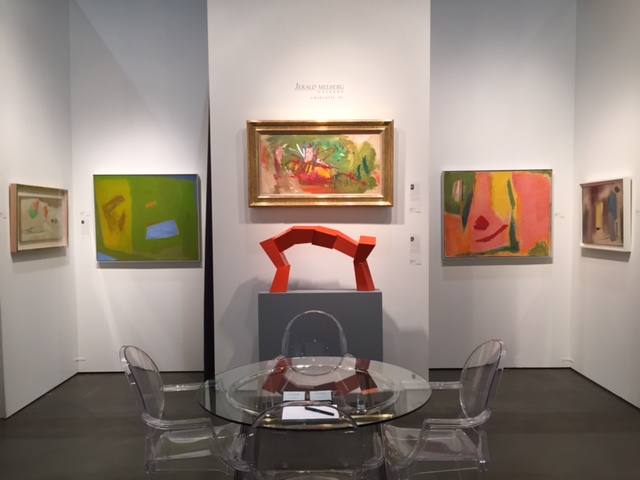 The organizers of the Seattle Art Fair are also keen on expanding knowledge at all ages and levels as part of the push to raise cultural literacy and patronage over time. It’s rare to see a lot of didactic text in an art fair booth, but Jerald Melberg Gallery created excellent bios for each artist shown, including contemporary artists like Susan Grossman, whose grey, rainy urban street scenes seem tailored to images of the Pacific Northwest (and may be a little too on the nose for collectors here, actually). In all events, it showed an awareness of and a commitment to the audience that was refreshing.

I wasn’t the only one a little surprised to hear that a New York-based gallery would be showing works solely from Chihuly. (After all, we already have the Garden and Glass, and serious collectors can already make a trip to the studios themselves.) But the design of the Marlborough Gallery booth was made to please the crowds, and it definitely did.

From the outside, it looked more like a pavilion, with smooth planks towering up to form a curved outer wall, which contained a neon installation. That chamber emanated a bright blue glow from a twisted neon chandelier, just visible enough from outside to beckon passersby. Meanwhile, the inner room of the booth featured a softly lit installation of blue “Persian” forms on a long shelf. On other pedestals there were a number of the studio’s most recent sculptural form: Rotolo, a coiling mass of somewhat flattened, striated tendrils.

The whole booth was peaceful and the attendants were courteous and welcoming. That alone was something of a relief for guests who may have been intimidated by the stoicism of other booths. It was definitely a good extension of the Chihuly brand: visually accessible and charming, especially to those who know they’ll never afford one, but can still get a good Instagram out of the deal.

As with all the other booths in this list, the work at the Jason Jacques Gallery booth was exquisite, but without a doubt it was among the most enigmatic. So much work at any given art fair is chosen to be an easy sell, to appeal to a wide audience. The work here was quite strange, and I love that they took the chance. It wasn’t just the choice of work, but how they displayed it that felt risky (in a good way).

I said earlier in this essay that I would probably pick a work to take home from Sundaram Tagore, but Katsyuyo Aoki‘s, baroque, skull-like “Predictive Dream” sculptures might win out. They were placed precariously on small shelves in a darkened, L-shaped corridor that featured prints of some of the first photos of the moon from NASA. In the corner space, opened to the surrounding area by slatted walls, Kim Simonsson‘s mossy green, flocked sculptures of elfin children perched atop pedestals, often with their faces turned from the crowd. And outside the walls, a display of knobby ceramics by Morten Løbner Espersen mimicked the moonscapes elsewhere in the booth. (Another panoramic print from NASA was hung low on the wall, in a way that subconsciously connected the subject matter.)

Martian-green children, alien skulls, moonscapes and moonjars (and even a sculpture of a salient hare, recalling the “rabbit in the moon”)…the array was among the most playful and unique at the fair and felt truly curated. Out of this world. 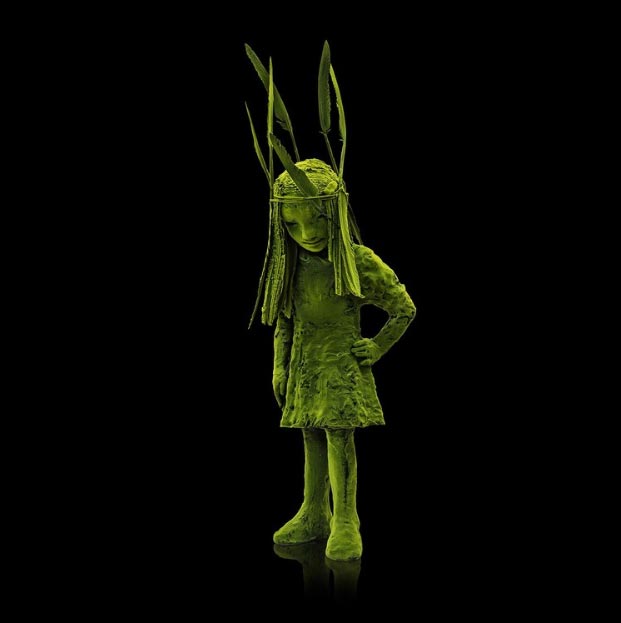 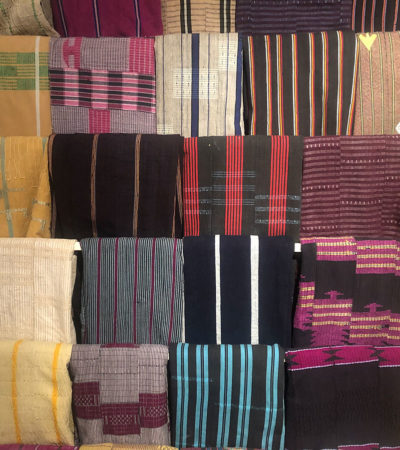 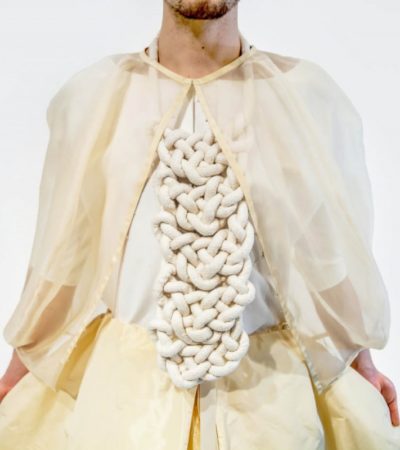 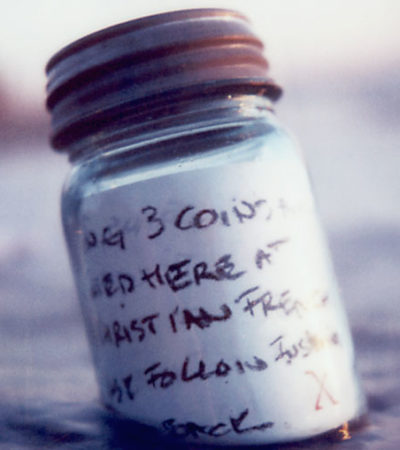 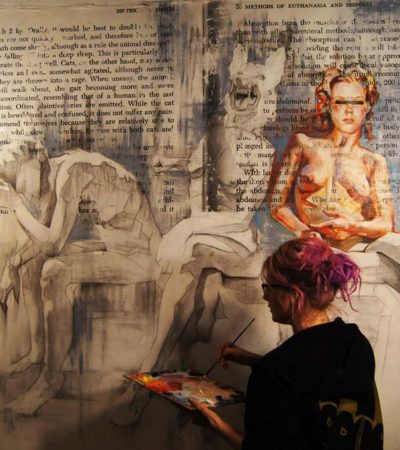