For 50 years, Star Trek in all its incarnations has left enduring marks in hearts and minds, from “Live long and prosper” and “Make it so” to all the technology it envisioned (e.g. iPads, empaths, the Motorola flip-phone). On May 21, EMP Museum premiered its exhibit, Star Trek: Exploring New Worlds, an immersive experience that features props and costumes from Star Trek series and films, authentic models of starships suspended from ceilings, and interactive exhibits, such as a transport simulator and a “Khaaaan!” scream booth. Up close, the costumes and gadgets are equal parts fierce and garish. It’s a bizarre and enlightening experience to see your television turned inside out and laid bare in front of you. 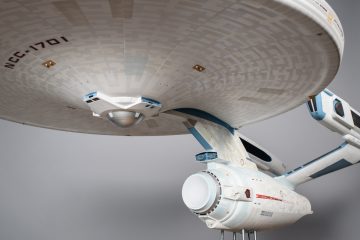 In my recent tour of the exhibit, Curator Brooks Peck talked about the show’s depiction of an optimistic future, where the discovery of new life has united humankind to the point that we’ve learned to work together in a diverse and meaningful Federation with an objective of peace, adventure and exploration. A person goes starry-eyed just thinking about it.

When Gene Roddenberry premiered the original series in 1966, the themes he chose to address reflected the politics of the day, from the space race to women’s rights. Included in the show’s countless artifacts are one of only two remaining type-2 phasers from the original series. That the phaser has a “stun” instead of kill option in itself points to visions of a better future world. Indeed, violence is so often diplomatically avoided on the Starship Enterprise, it makes you wonder whey they bother having a Chief Security Officer at all.

I stumbled onto Star Trek: The Next Generation in a weird, lonely way, which I can only assume is a typical enough introduction to the franchise. I’ve been goth my entire life, which meant a lot of pensive, sleepless nights, particularly in my middle school years when I didn’t get along with the other kids and my bedroom doubled as my mother’s walk-in closet. Every night at 11pm in 1993, when any reasonable eleven-year-old should be asleep, I watched (at the time) recent re-runs of TNG on a boxy television with fuzzy projection. Like Peck, I was seduced by the clean, polite intelligence of people from the future and the fish monsters from other planets that the enlightened members of the Federation Starfleet struggled to defend and understand. Captain Picard‘s voice in the opening credits still gives me a mild thrill every time I hear it:

“Space… The final frontier… These are the voyages of the Starship Enterprise. Its continuing mission: To explore strange new worlds… To seek out new life; new civilizations… To boldly go where no one has gone before!” 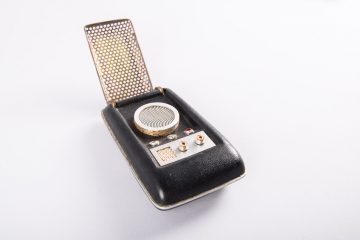 In graduate school, when a revered visiting writer criticized my use of a split infinitive in fiction writing workshop, I pointed to the famous use of “boldly go” as evidence that rules were meant to be broken and any fool would agree, “To go boldly” suffers in comparison. (He was not swayed).

I was obsessed with Data (an android), his cat Spot and his very human-like struggle to try to understand what it means to be human. I wanted Counselor Troi to marry Lieutenant Worf instead of Commander Riker, bus alas, Riker and Troi were married in a gross, silly ceremony in Star Trek: Nemesis (2002) (Star date: 2379).

The exhibit features pieces from just about every series and film of the franchise, but seemed a little light on swag from the J.J. Abrams films, for which I, as a cranky purist, am grateful. Abrams brought the Star Trek universe to a new generation of fans with his polished filmmaking and briskly-paced stories. The new movies are filled with action, adventure and intrigue—and I liked things the way they were before! Star Trek should be an austere, science fiction experience, with a lot of standing around and talking on the bridge, where impossible theoretical concepts are explained with a simple analogy and then executed with crude special effects. Of course, I’m wrong to so stubbornly hold on to the past. If anything, the show is defined by its evolution, and times must and always do change. 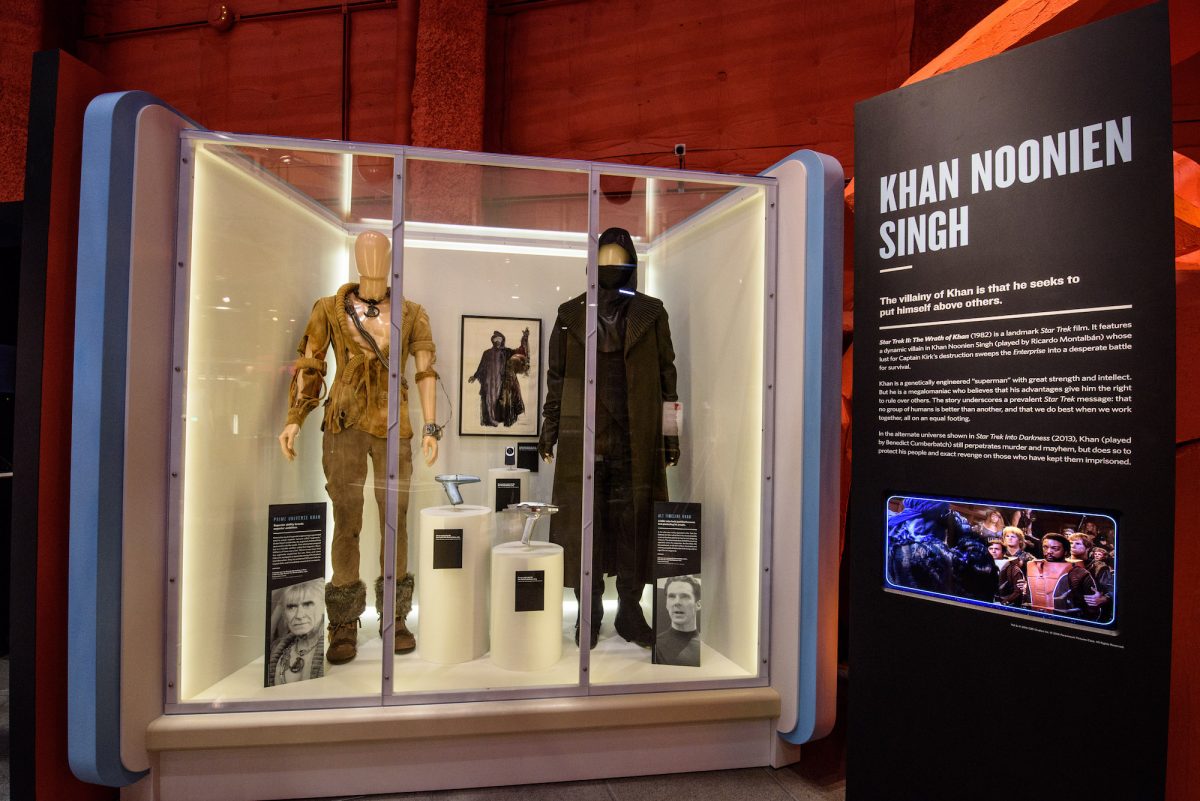 The exhibit does include a particularly worthy relic from Star Trek: Into Darkness (2013). First, we get Khan’s original costume from Star Trek II: The Wrath of Khan (1982) in all its rugged suede, chest-revealing glory, and right alongside that, we see the sleeker, darker version worn by Benedict Cumberbatch. When you look at them side by side, you can see how the original costume informs the new one, mostly in the ribbed detailing along the collar.

Star Trek: Exploring New Worlds is a costume-lover’s dreamscape. Up close, the clothes are rich with details you can’t see on your television, (particularly if you were watching in 199os on a standard def TV from the 1980s). Any fan of the show knows all about the uniform’s bizarre and frequent evolution throughout the years. The first seasons of TNG had Starfleet in a onesie, until the actors complained and the costumes were replaced with the two-piece, a change that brought a whole new set of challenges. Most of the exhibit’s costume collection features more special-edition, non-uniforms that were worn in iconic episodes, such as a fully outfitted Borg costume and the original head and bedazzled tunic worn by the alien Gorn.

And if you think there’s not going to be any Trouble With Tribbles at the EMP this season… think again.

Star Trek: Exploring New Worlds is open now. Tickets are $22/$16 for students, which grants you admission to all other exhibits. Visit EMP Museum to learn more.

The State of the Arts: Farewells and Pitfalls In Pioneer Square 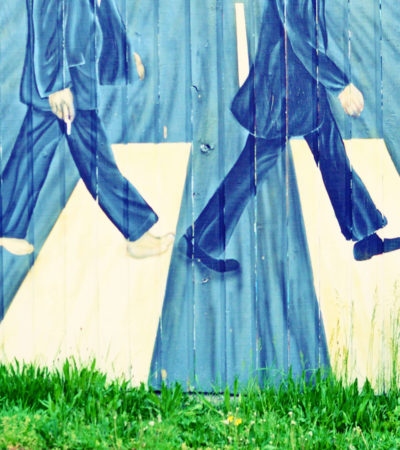 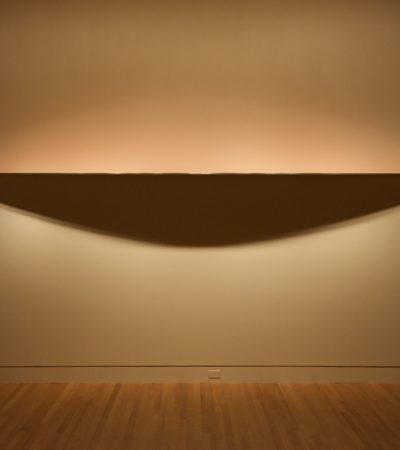 Requiem for the Heartland: Cris Bruch’s Others Who Were Here 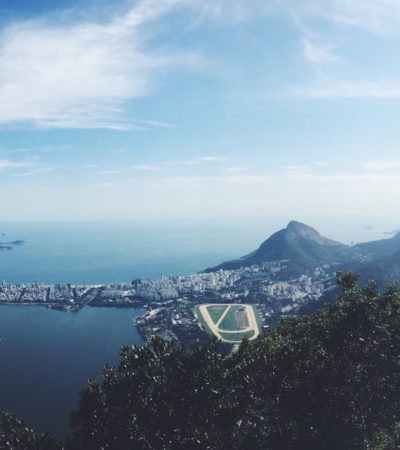 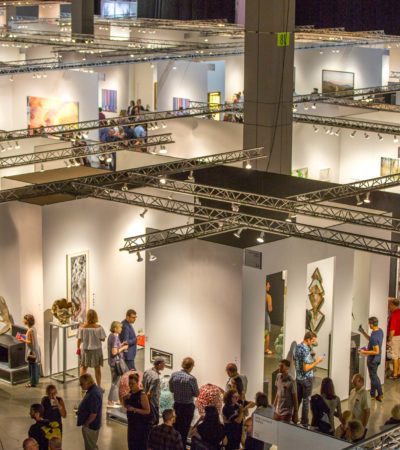