We in Seattle are frequently made conscious of the abundance and grandeur of the ocean. We can go whale watching in the San Juan Islands, witness salmon runs in Ballard Locks and fishmongers throwing the day’s catch in Pike Place Market, identify with the iconic ferry system and often get held up by sailboats at the Fremont drawbridge. Our connection to the ocean is one of the main reasons people flock to Seattle, why we have the most boats per capita of any US city.

We also know that the ocean remains mysterious, that we don’t always know what’s lurking beneath the surface. It’s no wonder that humans have always associated the ocean with the subconscious, the unknown, and therefore the scary sort of “what if?” questions we ask ourselves. Even when the questions are absurd, they can bring dread. What if I fell off the side of the ferry and no one saw me? What if Seattle had a tsunami? What if Orca whales attacked our sailboat? What if pollution got in the salmon and I ate it and got cancer?

For centuries, we imagined monsters and dragons lurking in the deep—and in fact, some truly gigantic, monstrous things do. The visions could be fantastic in stories like 20,000 Leagues Under the Sea. We don’t have giant killer squids here in the Puget Sound, but last century Octopus Wrestling was a local form of recreation, beginning after a diver was nearly drowned by a particularly huggy Giant Pacific Octopus in 1913. (Check out more of that weird history on the WA State Library Blog.)

But one film in particular still has us afraid to go into the water, a “what if” that seems more probable and magnifies its fear factor, and—though we have a lot of boats here—makes one want for a bigger boat. Steven Spielberg’s Jaws turns 40 next month, and it still holds up as more than an ode to oceanic paranoia, but a personification of all the nastiest “what ifs” in one giant killing machine. And yet, by giving that fear a physical form, in its time it was a form of catharsis—one that was apparently much in demand, as it became the prototype for the summer blockbuster.

It was 1974 and in America a lot was going on. We were wrapping up the devastating and protracted Vietnam War, which had claimed the lives of 58,000 American military, wounded an additional 300,000, and left many M.I.A. for good. We lost faith in the presidency through the Watergate scandal and Nixon’s impeachment came to a close in August of that year. The OPEC oil crisis had started in the early 70s and was threatening the economy with unpredictable jumps in gas prices, leading to 1 in 5 gas stations throughout the country running out of fuel. Change swept through the country like waves beating endlessly on the shore.

Meanwhile in Hollywood, Universal Studios was sinking its teeth into the buzz around a novel by Peter Benchley and was eager to adapt it into a screenplay. Jaws sat on the bestseller list for almost a year, and was still a bestseller when Universal—unhappy with initial pitches from directors—decided to give the opportunity to an ambitious twenty-six year old with one theatrical release to his name. Stephen Spielberg began his career as a television director and had just finished Sugarland Express (1974) with Goldie Hawn. Not realizing what he was about to dive into, Spielberg had the conviction to film Jaws on the open sea at Martha’s Vineyard to create an authentic look and persuaded the studio executives to give him the budget.

The novel was filled with subplots and dalliances between the men and women of Amity Island, the fictional sea town where the killer shark decides to spend summer vacation. The movie spends less time on these subplots (which add a more blatant psychosexual aspect to the whole shark/unknown metaphor). But in both the film and the book, the town’s officials are reluctant to cause a stir, fearing that hysteria over shark attacks would hurt the vital summertime tourism—so they ignore it and pressure others to do the same. It’s a common trope now, but this aspect had a special resonance at a time when Americans’ faith in officials and a national sense of invincibility had suffered several blows.

Police chief Martin Brody takes matters into his own hands—despite his fear of water—teaming up with Captain Quint, an eccentric shark hunter—is that phrase redundant?—and Matt Hooper, a marine biologist and shark expert. The three have different motives in their hunt for the shark, different perspectives and approaches, but it is all believable, and the tension and dynamics between them are as important to the film as the final confrontation with the beast below. They sell the existence of such a beast to the audience better than the special effects.

The initial storyboarding for Jaws presented the shark in every scene throughout the film from the opening through to the stand-off in the end, but executives at Universal had underestimated two significant and natural problems— sharks cannot be trained and the open ocean makes for terrible filming conditions. The shark would have to be a mechanical model. Spielberg describes the trial run of the mechanical shark in a 2007 Turner Classic Movies documentary called Spielberg on Spielberg:

The mechanical shark proved to be a production nightmare. Building the shark was expensive and time-consuming and most of the time it failed to work.

The second issue—filming on boats on the ocean—was no less problematic. Production schedules were days behind due to normal oceanic conditions such as choppy waters, unexpected sailboats in the frame, failing equipment due to salt water exposure, and the crew’s own physical exhaustion. A normal approach would be to use a film set to mimic the ocean in a giant pool inside a studio or on a lake where water conditions were more consistent and less destructive. Although the filming of Jaws was proving to be a nightmare, these pressures demanded creative solutions and ultimately made a more compelling film.

Studio executives were hassling Spielberg to finish the film, so he changed the story to imply the presence of the shark instead of offering the visual evidence of the shark attacks so literally. He shot the film from the perspective of the shark hunting its victims, giving audiences the creepy effect that they were witnessing the hunt from the view of the hunter. Jaws instantly became a more complex film true to fear of the unknown that lies beneath. The first sight of the shark occurs at the chumming scene with Chief Brody, a full hour into the film. The shot placed Brody in the foreground and gave the audience just a quick peek at the monster, not revealing its presence—or its boat-crushing scale—to Hooper and Quint.

In a formal analysis, we note that Brody became more acquainted with the unknown lurking in the very thing he fears, and this further establishes him as the prime hero of the tale. It’s worth delving deeper into what it all represents. In the Pervert’s Guide to Ideology, philosopher and film theorist Slavoj Zizek asks the question “what is the shark for?” He answers: “We fear all kinds of things. The function of the shark is to unite all these fears so we can trade for one fear alone.” Some of the most common fears as Zizek explains and is commonly cited are the fear of being attacked, bitten, exposed, being a victim of corporate greed, personal failure, isolation, death, illness, being abandoned, etc. Jaws certainly has a representation of these fears represented in the animal. The shark is of monstrous size and strength, has a insatiable appetite, does not discriminate between man, woman or child, and has a taste for vengeance. I would add to Zizek’s read and say that Jaws consolidated fears and provided a release valve for these emotions.

In a 1975 show, Siskel & Ebert explained that audiences would rise up out of their chairs and scream then laugh altogether in relief. From terror to laughter: The ability to laugh at your nonsensical and personified fears was the social success of Jaws. Spielberg drew upon the building social tension in 1974, offered a malevolent focal point, then a literal release valve at the end. Jaws is defeated by his own greed—trying to eat all it can, an oxygen tank, a concentrated representation of what we need to survive a dive beneath the surface—and when it next goes for the man who has faced it, the beast meets its end. Boom. The blockbuster was born in a pool of chum.

Other films released at this time were using horror and violence to peer into the American psyche. The Exorcist (1973), Chinatown (1974), Taxi Driver (1976), Apocalypse Now (1979) all seem to have a cynicism reflecting an inability to cope. But Spielberg’s Jaws was especially pivotal in what it meant for the medium and the marketing of film. It maintained the highest grossing sales for two years until Star Wars (1977) claimed the title.

With our city of Seattle changing as fast as it is, fear of the unknown and of change begins to build. We don’t have great white sharks, but we have the great “what ifs” looming over us and under us—volcanoes, earthquakes, rickety viaducts. We may not have control over the elements or even our infrastucture, but we shouldn’t let fear of the unknown get the better of us either. Sometimes it’s a shark, but maybe it is just a mechanical dummy or an octopus who just really wants a hug. 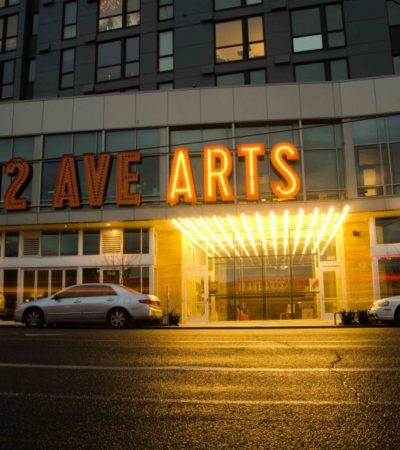 One Response to: “Jaws” at 40 and the Immortal Fear of the Unknown