To celebrate the last weekend of July, Seattleites made their way over to Capitol Hill for the city’s most anticipated block party of the year. With headliners such as Chromeo and Odesza, the streets filled up quickly Friday afternoon and stayed that way for the remainder of the weekend. Despite the scorching summer heat, guests danced into the night at the three stages, and later carried the fun into the surrounding neighborhood bars and restaurants.

For eighteen years now, Capitol Hill Block Party continues to provide a platform for visual artists and emerging and popular musical talent while bringing people of all backgrounds together. The Main Stage featured national acts like Spoon and the Budos Band with rising local stars like Beat Connection. (Fashion note: Reed Juenger of Beat Connection was wearing an ornate rope necklace from Neon Zinn by Seth Damm, a local whose creations have been appearing on performers from here to Lollapalooza.) The Vera Project is known for fostering young musical talent and visual artists, and its stage included local favorites making a splash like Iska Dhaaf, Lemolo, Raz Simone and Kithkin, plus bands like HOLYCHILD from Los Angeles and Slow Magic, who immediately began an international tour after the festival. Neumos and Barboza’s stages also had a noted mix of local musicians (Slow Bird, Alicia Amiri, Pollens) and rising stars like Natasha Kmeto and Shaprece.

With over 100 local and national artists and 30,000+ participants, it is easy to get caught up in the chaos and forget all the work put in to make an independent festival of this magnitude happen. Capitol Hill Block Party has accumulated a number of sponsors over the years, including KEXP, the EMP Museum and Caffe Vita. The Vita crew was spotted all over the festival, rocking their Vita logo tees. With two espresso carts and their Capitol Hill location serving up cold brews all weekend, the baristas hardly caught a break.

Caffe Vita and Via Tribunali owner Mike McConnell has been involved with Block Party since its inception. Vita has been a pioneer in fair trade, allowing Seattleites to maintain their coffee habit more ethically, and the roaster’s local outreach has made it a beloved institution. Vita Marketing Director Gretchen Hackler reflects on how Vita’s idea of branding goes beyond the charming Punchinello on its product. “It’s one thing to see your brand’s logo, but a whole other thing for people to actually come in and be surrounded by people who are there to support the community.”

During Block Party, Caffe Vita offered VIP guests and lucky winners access to their private Bean Room sessions, where artists performed fifteen-minute acoustic sets in an intimate arena. After listening to the powerful vocals of Spoon’s lead singer Britt Daniel accompanied by guitarist Alex Fischel in the Bean Room, I mingled with the crowd on the street and in the beer gardens, where I could spot stylish festival goers.

As expected, denim cutoffs were everywhere, along with crop tops and bright-colored sunnies. Comfort is key at any festival, which made this summer’s favorite sandal, the Birkenstock, the shoe of choice (also featured in fashion writer Lisa Cole’s Vogue a Trois). Kathleen Warren made a bold but definitely chic statement in a silk floral jumpsuit by Yumi Kim, while maintaing an element of comfort. Another favorite was McKenna Dean who wore a retro polka dot crop top from Topshop and accessorized her straight-across bangs with round frames and a red lip.

So much goes into making a festival of this size happen year after year—the artists themselves, the people donating their time and energy, and even the people kicking their outfit choices up a notch to demonstrate that this is an event to get excited about. Read more about Seattle’s big summer parties, including the Caffe Vita Midnight Supper that concluded the weekend.

For the month of August, Vanguard Seattle has partnered with Caffe Vita to offer our first sweepstakes. Make sure to subscribe for your chance to win a Road Travel Pack by BLK Pine Workshop or $5 gift card to Caffe Vita on our Facebook page! 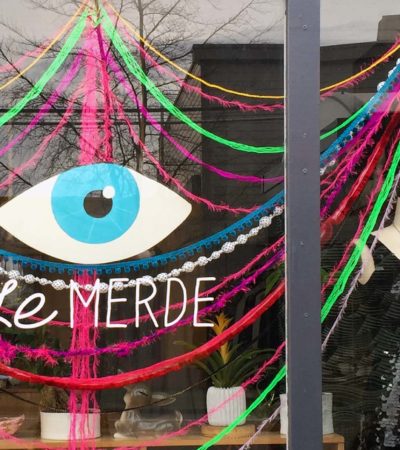 When Le Merde Hits the Fan