On March 13, Kate Spade New York made a colorful debut of their Spring 2014 line at Bellevue Square Nordstrom with a fashion show hosted by Kate Spade New York President and Chief Creative Officer Deborah Lloyd and Exclusive Brand Stylist Brad Goreski. Lloyd was dressed in a chic navy and white ensemble and had a great rapport with her co-host, Goreski, who was amusing and sociable with the crowd.

The pair gave a genuinely charming presentation with five barefoot models who joined them on stage one by one in a new look from the Kate Spade Spring 2014 line. Together Lloyd and Goreski styled each model with shoes, jewelry, accessories and of course Kate Spade handbags. Looks included several brightly colored dresses, including the Edith dress, which is a linen A-line piece embellished with colorful round gems at the neckline. It was styled with white and straw Dancer wedges and a white Elissa tote adorned with a colorful Bella Magazine square silk scarf. One of my favorite dresses, the Mariella, proves that horizontal stripes are indeed flattering and beautiful. The Jackie Capri pants in fresh white were paired with the Barcley sweater, which sports the lemon grove print that is the anchor of this season’s line. Lemons, brightly colored pieces, especially geranium and yellow and the New York girl on Italian summer holiday were the main motifs of the spring line. Lemons and the color yellow, gold and white accessories, gemstone colors and Via Limoni Capri style prints, including the fabulous Elza fit and flare dress, made me look forward to the warmer days ahead.

As always, the handbags stand out with lighthearted charm and feminine style. The Vita Riva Collection included a sunny little wicker lemon shaped clutch, a wicker embroidered tote, and a wicker bag shaped like a tiny car that certainly makes a statement on its own. My personal favorite is the Grand Tour Wicker Camera, a small wicker and silver cross body in the shape of a vintage camera. The Capri style prints follow to the handbags as well, with the Via Limoni slim Vivi clutch and Francis tote. From daytime carryalls to nighttime elegance, the Kate Spade handbags charmed the crowd. Shoes had gorgeous cutouts and were in metallic, brights and graphic black and white. Tone-on-tone jewelry and chic sunglasses gave a modern take on the 1950s and 1960s.

Following the show I had a quick chat with Brad Goreski and Deborah Lloyd backstage. Brad Goreski became well know as an assistant to stylist Rachel Zoe on her Bravo television show, The Rachel Zoe Project. He later left to pursue his own styling career with clients such as Jessica Alba, Rashida Jones, Stacy Keibler and Demi Moore, and had his own Bravo show, It’s A Brad Brad World, which he currently is taking a break from. Deborah Lloyd is known for designing for Burberry and Banana Republic, and since taking the helm of Kate Spade New York she has been credited for turning it into a lifestyle label that includes clothing, jewelry, stationery, china, beddings and books.

Brad Goreski is known as a “color guy”, so I inquired what his favorite pop of color is for this season—and as it turns out it is the gorgeous coral that is also prominent in the collection. He had told the audience earlier that he and Deborah think that glitter should be an actual color—so what was his advice for incorporating metallic and sequins for daytime? Don’t be intimidated; start with accessories, a sparkling pair of shoes or a glittering necklace and get braver from there.

For Kate Spade Fall 2014 Deborah Lloyd told me that she was inspired by her trips to Asia and we will be seeing a lot of navy, especially for evening. Red, blush, and pink were also prominent in the Fall 2014 Collection and the new silhouettes have a decidedly modern appeal to them.

Need a pick-me-up from your dark, wintery wardrobe? The Kate Spade Spring/Summer 2014 Collection is decidedly bright and cheerful, with chic pieces just waiting to go on holiday with you. 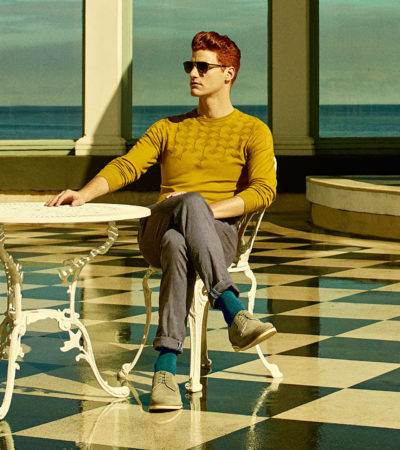 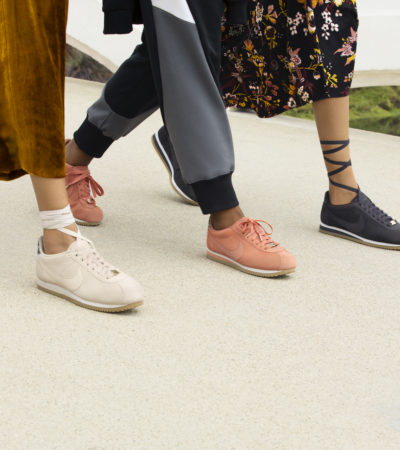 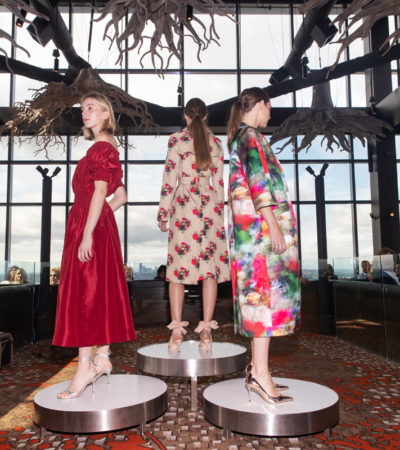 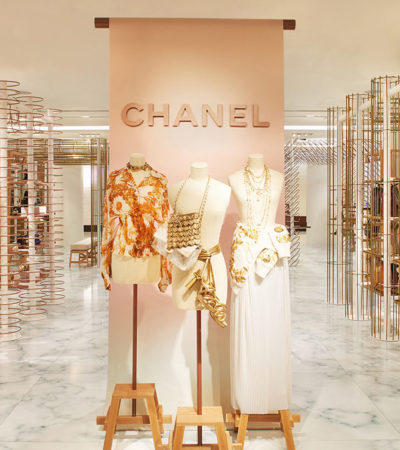