In celebration of the holidays, this month’s Pioneer Square Art Walk featured a variety of group shows, and it was more than ever too much to see in one trip. Gallery IMA and Core Gallery both have groups shows of represented artists, while the open studio space on Occidental currently is hosting works from many artists from the region, chosen by current resident Juan Alonso. Other shows brought artists in around a concept: e.g. “Suburbia: Dream or Nightmare” at Linda Hodges Gallery and “White” at Gallery 110. Punch! Gallery has its annual juried show, this time titled “Whither the American Dream?” for which over 500 artists from around the world submitted over 1000 works. (Considerably fewer are on display.) Meanwhile, on the night of art walk, the TK Lofts held the sale for the 30-day Art Challenge, for which dozens upon dozens of artists produced a piece of art on canvas board every day for 30 days. The hundreds of works were displayed in a massive collage and visitors could buy any piece for 50 dollars.

In short, there was so much to see, and part of the fun is seeing how works interact with each other in these gallery spaces—whether presented as a mosaic of small works, laid out as a sequence on the walls, or intentionally paired. In that spirit, there were also works by individual artists whose juxtapositions have interesting and powerful effects. Works that achieved this could be found at G. Gibson, SOIL Gallery, Platform Gallery and Punch Gallery.

Eirik Johnson’s large-scale photographs of inhabited locales truly engulf one in the atmosphere he captured. In this series, Johnson has photographed one scene at two times in the year. These diptychs document changes to the landscape, at once suggesting the time’s passing and stillness. One instinctively compares and contrasts the two scenes and searches for signs of life in the desolate barrens. In Barrow Cabin 02, one can notice a blatant difference; a house has disappeared, leaving only a children’s playhouse, blanketed in snow. In other pieces, elements such as chairs and bins are subtly moved or added, but a visual sense of what comes before and after is not necessarily evident, giving a cyclical sense to the time documented. Perhaps the most shocking transformation in these works is captured in the piece The Arctic Ocean. Johnson photographed the scene in both the summer of 2010 and the winter of 2012. The winter landscape has completely engulfed the arctic “beach” that can be seen in the summer months. The pairing of these two images presents the stark contrast of weather in a changing climate, but also unites the colors and softness of both scenes.

The current exhibition at G. Gibson Gallery is on display through January 18. More of Eirik Johnson’s art can be seen on his Web site.

Pete Fleming, a recent import from Glasgow, Scotland, creates interesting scenes and geometric designs through the use of mirroring. Fleming’s landscapes are constructed from everyday scenes—such as the Seattle skyline—but the “flip” transforms our conceptions of the space. In Network, Fleming unites the linear qualities of the power lines to create a geometric design. In his statement, Fleming states, “These new works investigate how we conceive ourselves in relation to technological systems, visual culture and the socio-political environment. What is our role as networked individuals, connected nodes, and what purpose does this serve?” This sense of networking and “connected nodes” is especially illustrated in Network—as these power lines represent a sense of connectivity in itself. The pairing of two realities equate to a constructed fantasy.

The current exhibition at Soil Gallery is on display through January 28. Fleming’s collaborative work with Allyce Wood is on display at Bellevue City Hall Pavilion through February 15. More art from Pete Fleming can be seen on his Web site.

Patte Loper’s piece Observation Deck for a Bottomless Pit stands out with incredible graphite details and a surreal juxtaposition of familiar forms. Its title, its muted palette and its subtlety fit beautifully in the austere presentation at Platform Gallery. Observation Deck for a Bottomless Pit is a fantastic image with ties to reality: The rendering of the mountainous background that fills the upper half of the picture is natural and rugged, while the space below and evidently contained within the mountain is a sleek, mid-century modern marvel, resembling a lair from an old James Bond movie. Indeed, there is a sense of Cold War imagination in the piece that could be nostalgic or critical, but not campy. The insane hazard of a large unbarricaded pit and the mod circular deck around it lies beneath a looming mass of rock that would in reality collapse upon it all—an impossible scenario that remains relatable, serene and sinister, through Loper’s intricate and thoughtful details.

Platform Gallery is closed for the holidays and will reopen with a new show on January 2. Visit the artist’s Web site to see more of Loper’s work.

The pairing of craft with serious, international issues is a unique approach and one that is used by Jennifer Drinkwater in her piece I Found Love At Last. Drinkwater tackles the issue of drones by taking the cover image from Time magazine in February of 2013—part of a series by the artist for which she creates embroidered versions of magazine covers. In I Found Love At Last a predator drone hovering over anonymous rooftops of Suburbia, USA is transformed by Drinkwater into a crafty, panel of cross-stitch. The embroidery creates an interesting textural appearance, but also abstracts and obscures the image. Drinkwater creates a juxtaposition not only in medium and message; In her magazine series, she addresses drones on the cover of Time and celebrities on the cover of People—a pairing that is commonplace to anyone who has stood in line at a grocery store, but is also surreal when duly considered. Drinkwater states on her Web site where other works can be seen, “[Text] links our use of language with our perceptions of images and forms. I appropriate elements and materials from all areas of visual culture in order to establish connections and renegotiate meanings.” Pop culture comes to play with international politics and controversies.

The current exhibition at Punch Gallery is on display through December 21. More of Jennifer Drinkwater’s embroidered art can be seen on her Web site. 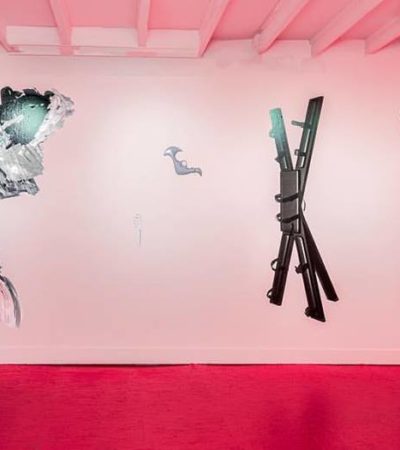 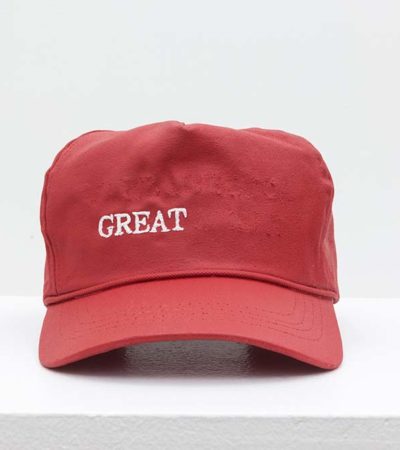 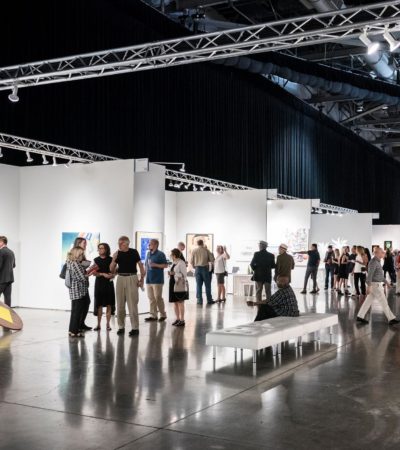